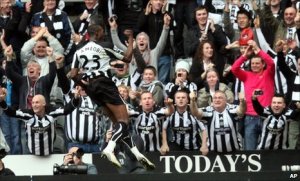 Newcastle United 4-3 Sunderland (March 1929) After a poor start to the season, Sunderland had propelled themselves up to second by the time of their trip to St James' Park, losing just one of their previous 17 league games. Newcastle were languishing in tenth, but as the Guardian had it: "The rivalry between Newcastle and Sunderland is so keen that when they meet few will predict a result with any confidence." The Daily Express went a step further: "Sunderland still believe they have a good chance of taking league honours north, but this visit to Newcastle may not improve it."  In the event, Newcastle came out on top in a 4-3 thriller, with Sunderland centre-half Adam Allen putting the decisive goal into his own net.

Prior to 1948, as a result of Newcastle’s relegation to Division Two and the cessation of football during World War II, there had not been a Tyne-Wear derby for 14 years. When Newcastle returned to the top-flight, it was without their inside-left Len Shackleton, who had joined Sunderland in a British record £20,500 deal earlier that year.

Sunderland were described in the Daily Express as “the club that Christmas forgot” as they went down to another festive thrashing to their arch rivals on December 22, 1956.

Alan Shearer scored his 206th Premier League goal in this match; his last goal in the famous black and white colours of Newcastle . The day had not begun well for Newcastle: Sunderland, coming to the end of a dismal season in which they would ultimately be relegated with just 15 points, held a deserved 1-0 lead at half-time. “Usually I’m a very calm person,” Newcastle boss Glenn Roeder said afterwards, “but if I’ve ever jumped up and down like a lunatic, it was during half-time. I certainly stripped the walls.”

The team-talk worked, and Michael Chopra levelled on the hour. A minute later, Shearer put Newcastle ahead from the penalty spot, wheeling away with one arm aloft after his 409th career goal. Charles N’Zogbia and Albert Luque then completed the demolition, and the away fans were jubilant.

The next morning, though, the backpage headlines would belong to Shearer, and it was not good news. A 71st-minute Julio Arca challenge saw him make an early exit, and he told reporters: “That’s it for me. I will have a scan and if medial ligament damage is confirmed, then I’m done.” It was to be his last ever appearance as a professional footballer.

This derby match will be the most memorable match for Geordie fans. After being relegated in 2009, Newcastle bounced straight back to the top tier of English football after taking the championship by storm.

At the end of October Newcastle were doing incredibly well for their first season back in the premier league had earned some fantastic wins over Chelsea in the Carling cup and a 6-0 trouncing of Aston Villa. Coming into the game, Newcastle were standing in 9th position, but had perhaps caused a scare in their previous game against Arsenal; a 4-0 loss.

However, Newcastle United played imperiously well and led 3-0 at half time thanks to a brace from Kevin Nolan and a penalty from Shola. At the start of the second half, Titus Bramble, the former Newcastle center back, picked up a red card, before Shola scored his second goal of the game. Kevin Nolan completed his hat-trick 5 minutes later to rub salt into the wounds.

Although Darren Bent scored a late goal it proved no sort of consolation to Bruce or his players. The win proved to be one of the greatest Newcastle victories of all time, especially considering the circumstances.

Lets hope Newcastle can reciprocate these sort of performances on Sunday, and grab a much-needed victory.