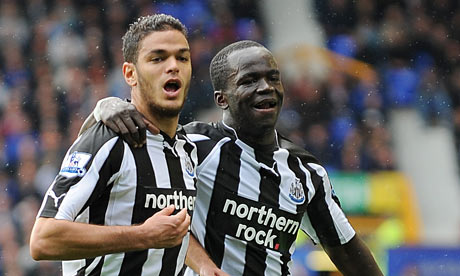 When it was announced that Newcastle United would be signing the mercurial Frenchman Hatem Ben Arfa on a loan deal with a view to a permanent view back in January 2010, the geordie fans were absolutely ecstatic.


He was a high profile player who had impressed during the early part of his career at Lyon, and had continued to impress for the national team. He was a young, hardworking lad who looked to have the best years of his career ahead of him.

After a quiet start during a 2-0 defeat at home to Blackpool, he rifled in his first goal for the club in the following week (a goal which proved to be the winner) at Everton. His flair and touch blew away the travelling Newcastle fans and ignited a sense of hope for the dedicated supporters who had seen their beloved team relegated from the league only two seasons before. This newfound talent seemed to represent a sense of hope and soon became a fan favourite; a sort of figurehead for the fan’s desire to again experience the joys of European football.

However it wasn’t long before tragedy struck. A hard tackle from Manchester City enforcer Nigel De Jong resulted in Ben Arfa breaking his leg in two places and ruling him out for the rest of the season. The fans were devastated, Chris Hughton bemoaned the loss of his marquee transfer signing and the player himself sunk into a depression that he was unable to highlight his talents at the highest level of the English game.

He returned to first team football at the beginning of the season after almost 11 months away from competitive football, he failed to find the form that he had previously shown in the short time he was able to, after signing from Marseille. He was unable to find the scoring touch he had previously shown, and had to wait until the 26th December to score his first goal of the season, against Bolton (a left-footed volley from the edge of the area). He scored another goal only 12 days later in the FA Cup against Blackburn Rovers; a goal dubbed as ‘magical’ by BBC Sport, and tipped to be a contender for goal of the season. It seemed that the penny had finally dropped. He was working hard, creating chances and scoring goals, adding another spectacular effort in a losing cause against Fulham.

Despite two poor performances against Brighton and Blackburn, he scored an absolute beauty against Arsenal on Monday night, beating 2 of Arsenal’s defenders before driving a fast-paced left-footed shot into the botton left hand corner of the goal.

He certainly has the potential to be a class player, but whether he’ll live up to those expectations is another matter. Going ahead from the match on Monday night, he now needs to show patience at Newcastle United. In the past he has shown his temperamental and a somewhat impatient attitude so will therefore have to grow up if he wants to live up to the public’s expectations of him.

I for one am a supporter of the Frenchman and I sincerely hope he is the man who can lead the club to some key victories in the last 10 games of the season. He has shown flashes of his brilliance, and the challenge for him now is to produce that on a week by week basis and help bring the silverware that his adoring fans so desperately crave.