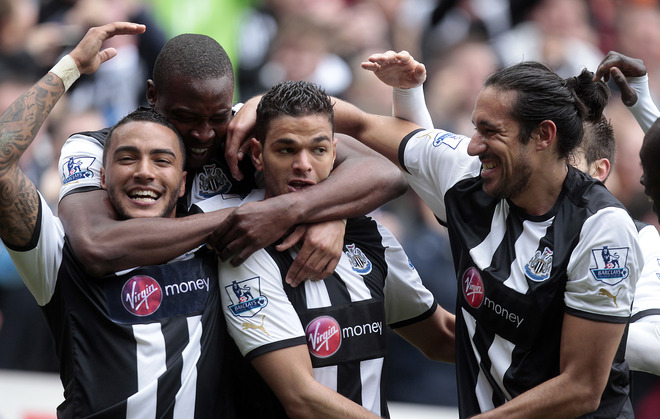 Despite all of the victories, the high league position and the hope moving forward, there's still a question to be answered on Tyneside: What exactly is the best XI (and formation) that Alan Pardew can use to get the best out of his squad.


The answer may seem obvious. Surely what he’s got out there now is perfect – we can’t lose at the moment. But that’s not necessarily the case. Pardew has recently played a number of players, most notably Jonas Gutierrez, out of their natural playing position, and not just because injuries have forced him to. Additionally, some player’s are notably unhappy. A mid-game substitute of Shola Ameobi for Demba Ba is becoming traditional, and our star striker (or one of our two star strikers, I should say), is not impressed.

There is a way to sort things out, though, without tinkering too much with this winning side. I’m going to do this assuming that Tiote, Coloccini and Ryan Taylor will all be fit for our next game, and you must also remember that this is just opinion – I don’t profess to be any sort of tactical genius. Anyway, here goes:

Goalkeeper: Tim Krul – This is about as obvious as they come. Krul has been fantastic between the sticks this year and will continue to be for the remainder of the season.

Left Back: Davide Santon – Injury and inconsisent performances have had Santon in and out of the side in 2012, but when he’s on a game, he’s the best player we have suited to play at left back. He works pretty well with Coloccini as well.

Centre Back: Fabricio Coloccini – Colo is the captain, and as such is as important a player as there is on this squad. Furthermore, his play has been fantastic all season long, and the defence will improve dramatically upon his return.

Centre Back: James Perch – This is the first of the more questionable choices, but I really believe that “Perchinio” has proved himself to be a much better option here than Williamson over the last few weeks.

Right Back: Danny Simpson – Simpson is rarely omitted from the team sheet and, really, that speaks for itself. His clearances off the line this season have been so crucial to a number of key victories.

Left Wing: Jonas Gutierrez – Gutierrez has been in fine form this year and there aren’t really many options besides Jonas at this point. The only two other viable options are left backs, Ryan Taylor and Shane Ferguson.

Centre Midfield: Yohan Cabaye – An attacking force and another player who you’ll barely see miss a game, Cabaye has to feature here.

Centre Midfield: Cheik Tiote – When not on international duty or sidelined with injury, Tiote is one of the more underrated players in the entire league. He’s an enforcer defensively and a great passer, very important for team chemistry.

Striker: Demba Ba – This seems like a simple solution to a pretty important problem. The way to keep Ba happy is to move him from the wing in a 4-3-3 to an out-and-out striker in a 4-4-2. He’ll surely be in with the goals again this way.

Striker: Papiss Cisse – The man of the moment, and presently the best striker in the world (slight bias, but you know it to be true), Cisse just has to be a feature in this team. The goals will keep flowing for the foreseeable future.