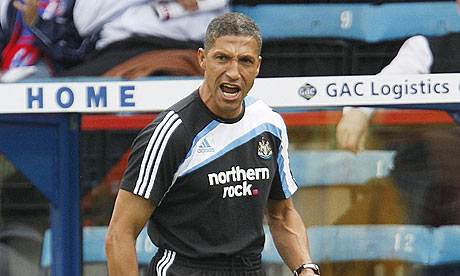 In a rare interview with the Telegraph newspaper, former Newcastle manager Chris Hughton has said his sacking was ‘unjust’ and that he ‘should still be Newcastle United manager’. Toon owner Mike Ashley caused seismic tremors through the North East on 6th December 2010 when he sacked the now Birmingham boss with Newcastle sitting comfortably in 10th place in the Premier League.


In the previous season, Hughton had overseen a remarkable return to the top flight as Newcastle stormed to the Championship title in their solitary season in England’s second flight. Throughout his time in charge though, Hughton had to constantly answer questions over who actually selected the team. In his recent interview, Hughton clarified: “It was a slippery slope; even key players like Kevin Nolan even refuted these silly suggestions.”

While his Birmingham side currently sit 4th in the Championship and look set for at least a play-off place, Hughton spoke openly about how some bad luck had brought his time as Newcastle manager to a premature end. “Contrary to other things I have heard, I brought Tiote and Graham Carr to the club, we brought in Ben Arfa and it was unlucky he broke his leg and suffered a long time on the side-lines.”

Speaking about his sacking in detail for the first time since his departure, Hughton spoke honestly saying the decision was ‘unjust’. “We had just won promotion; we were 10th in the division. My feelings at the time were the same as nearly everybody else’s” he said. Comparing the Birmingham side he inherited to the Newcastle side he departed, Hughton did praise the man that ended his time in the North East: “At Newcastle I had a core of the team that wanted to stay (after relegation) and that is a huge testament to Mike Ashley and Derek Llambias who could have had an absolute fire sale.”

Despite claiming he should still be in the job, Hughton did speak positively about his time in the North east: “There is no bitterness even if I feel that I should have not lost my job. I am enjoying the challenge I now have with Birmingham. It’s been manic”. Many Toon fans will still be divided as to whether Hughton should have ever lost his job as Newcastle manger, however, with the club sitting nicely in 5th place and still harbouring hopes of qualification for next seasons Champions League, there are few Toon supporters who are showing remorse over the sacking of Hughton.

What do you think? Would Newcastle be where they are now if Hughton was still in charge? Let us know your thoughts.