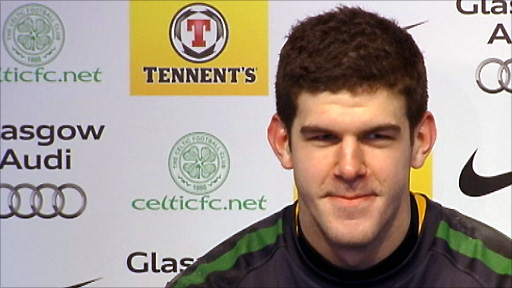 After coming through the ranks at Newcastle United, Goalkeeping rookie Fraser Forster looks to be on his was out of St James Park to pursue first team football.


This follows the 24 year old being third choice at United with Tim Krul and Steve Harper taking up the spots in a successful side on Tyneside this campaign.

Celtic have launched a bid for Forster after the Goalkeeper played a big part in bringing the SPL title back to Celtic Park after a 4 year absence.

The 24-year-old’s agent, Mark Curtis, has now revealed he is set to meet with Celtic chief executive Peter Lawwell to try and finalise a deal.

“I will call Peter Lawwell on Thursday and arrange a time to meet and try to finish things off – we need to,” Curtis told the Scottish Sun.

“Fraser’s been away but I spoke to him and know where we need to be. I will now arrange to meet Peter.” Queens Park Rangers have been credited with an interest in signing Forster, but Curtis insists the keeper is set on moving to Celtic.

“Other clubs are not in his mind,” Curtis added. “Does he want to stay at Celtic? Yes.”

This move comes after Forster was told by close friend John Ruddy, that if Newcastle born keeper wanted to aim for the top and play for England, he would have to look elsewhere, with the Toon Army looking solid with Krul in the number one spot.

He earned his first professional contract in 2005 after coming through the ranks at United. The Royal Grammar School boy’s future was stalemated for a while with the likes of Shay Given, Steve Harper and the young Krul himself all above on the pecking order.

In his time at Newcastle, Fraser enjoyed great times with the Reserve team and says that his move away from Tyneside is purely for football reasons. This sees another one of the Wallsend Boy’s Club products depart from the club they supported as a boy and I’m sure everyone from Alan Pardew to the fans will wish Fraser all the best for the future.

Do you think he could have made an impact at SJP?