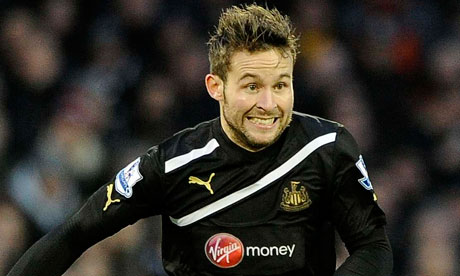 After a breakthrough season in the Barclays Premiership this season, Yohan Cabaye has drawn numerous plaudits for his slick passing game, tough tackling and an eye for goal.


As he starts for France in the European Championship this Summer, we take a look at just how good Cabaye is, taking into account all the performance stats this season for the Magpies.

It is clear from looking at the above stats that one of his great strengths is his renowned passing game, whether this be short passes in the midfield or looking further afield to set either Ba or Cisse away.

Perhaps the best example was a spectacular through ball to the latter against Stoke, splitting the defence in half and setting Papiss Cisse up for another goal.

That said, six assists is a decent tally but far from superb, yet maybe this reflects his deeper role by where he was more often than not starting the move, as opposed to making the key final ball.

The high assist makers in the league normally slot in either in the wide areas, or just off the striker, but from a pitch map of Cabaye’s average position, we can see it was just off the centre circle. Therefore, his high pass success rate is even more impressive, and perhaps this is what shows him to be so good.

So, his high quality passing game isn’t up for debate. However, there is more of a cloud over his tackling and defensive game. On the stats, he did make a good amount of tackles and interceptions, showing him to be a good contributor to the team and a hard working individual.

Yet, 7 yellow cards this season, all obtained in the Premier League, isn’t ideal. There was also a petulant incident involving a Brighton player in the FA Cup which resulted in a three match ban for the Frenchman, something he simply must cut out of his game.

He only missed four games in the League all season, and with most of these due to this ban it is imperative he learns to keep his temper more. Aside from that, Cabaye has tended to make too many fouls this season, a case in point seen from the France-England game in the European Championships on Monday, where he made three or four blatant fouls.

While maybe this can be attributed to the change in domestic league in terms of his ill-discipline, it is again something which he must work on if he is to push on and become one of the best in the division at his role and position.

Possessing a powerful long range shot, shown against Stoke and particularly in the superb win over Manchester United, Cabaye is a talented footballer technique-wise, undoubtedly. Now, he must push on at strengthing other aspects of his game, such as his work off the ball and his discipline. If he can up those two areas, Newcastle could have one of the best central midfielders playing in the Premier League on their books.

What’s your view on Cabaye? Will one of the bigger clubs come in for him this Summer? Get in touch!

5 Comments on Just How Good Is Yohan Cabaye?