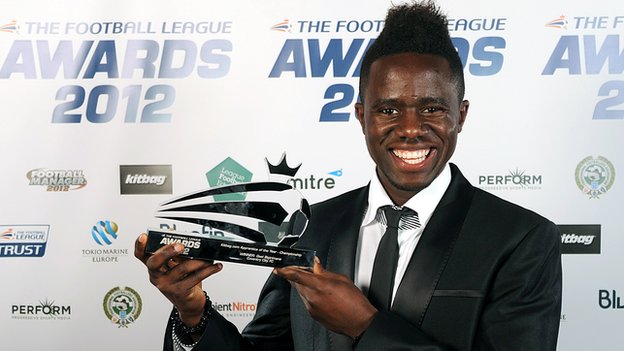 The next Cheick Tiote?


It is thought to be around the £1 million mark, with a clause entitling Coventry to a percentage of any profit made if the player is sold on by Newcastle.He will wear the squad number 49 upon the famous black and white shirt.

Bigirimana made 28 appearances this season in his breakthrough year, including 16 Championship starts. More impressively, he was named as the Football League’s ‘Apprentice of the Year’ in 2012. So, who is Gael Bigirimana and what can Newcastle fans expect of their new capture?

Bigirimana’s story is a heart-warming tale, growing up in his home country of war torn Burundi before moving to the city of Coventry with his family in 2004.

Aged 11, he nonchalantly approached the Coventry youth set-up in the local Asda where he was shopping with his family, and asked for a trial. The rest, as they say, is history. While Coventry might have been relegated from the Npower Championship this season, in what is ultimately a poor campaign, Bigirimana’s rise has been a polar opposite to the Sky Blues fall. He is now a member of the Congo U18 set up, but is also eligible for Burundi and Rwanda.

Bigirimana’s style of play, even at his young age, has been likened to that of Chelsea star Michael Essien, somebody who can sit in-front of the back four and pick the ball up and play.

He won’t immeadiately join up with the first team, and this club statement shows what fans can expect Bigirimana to be up to for the near future ; ‘Bigirimana played 26 times in the Championship last season and won the divison’s Apprentice of the Year award. He had been with Coventry since 2004 and is expected to link up with Willie Donachie and Peter Beardsley’s Development Squad at the beginning of his Tyneside career.’

Therefore, Newcastle can consider themselves very pleased to have secured his signature for the next five seasons, as he is clearly a talented individual. However, the hard work starts here for the 18 year old, and there is much to do be done to ensure he fulfils his early potential and truly makes it in the English game.

Perhaps Newcastle fans will see him in action with the first team in either of the domestic cup comptetitions, or the Europa League as an increasing amount of fixtures will result in a bigger or wider squad being needed.

What are your thoughts on Newcastle’s latest signing? Who would you like to see follow Bigirimana through the entrance door at the Sports Direct Arena this season? Get involved in the debate, either by commenting on the site or finding us on Twitter, either @TheSpectatorsView or @Aitkenheadhj.

3 Comments on Congo U18 Midfielder Joins the Magpies