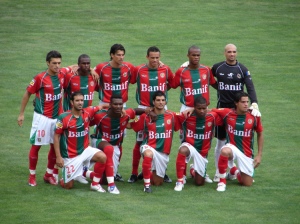 With Newcastle gearing up for their first European League game since 2007 tomorrow night, The Spectator's View have compiled a selection of facts concerning the two teams.

Maritimo have played against English opposition twice in this competition, they were eliminated by Leeds United in the first round in 1998 and in 2001.

The Madeira-based club have had three notable British players. One of which, Glaswegian striker Ian Wallace, also spent two years at Sunderland

The Portuguese side’s biggest home win in the competition came against British opposition, they beat Bangor City 8-2 in the Third qualifying round in 2010.

Maritimo have won both previous matches at home to English sides in Europe: 1-0 against Leeds in 1998 and 2001.

In six previous UEFA Cup/Europa League appearances, Maritimo have only once made it past the first stage (1994/95).

All but one (the first) of Maritimo’s seven games at home in European competition (exc. Qualifiers) have finished 1-0 (four wins, two defeats).

Newcastle defeated two Portuguese sides on their way to their last major trophy. The Magpies beat both Sporting Lisbon and Vitoria Setubal on their way to Fairs Cup glory in 1969.

More recently Newcastle’s last game against Portuguese opposition ended in disappointment as they were knocked out of the Uefa Cup by Sporting Lisbon at the quarter-final stage in 2005.

Romain Amalfitano could make his European debut for the club this week despite never starting a top flight game in any country.

This season is Newcastle’s 17th in European football, they have scored in total of 211 goals in continental competitions in that time.

Newcastle are appearing in Europe for the first time since 2006/07, when they reached the last 16 of the Europa League.

The Magpies have never won in Portugal in a European competition (D2 L2).

However Newcastle have lost just two of their nine meetings with Portuguese teams in Europe (W4 D3 L2).

The Magpies have won eight of their last 11 matches away from home in Europe (exc. Qualifiers).

What are your predictions for the match?