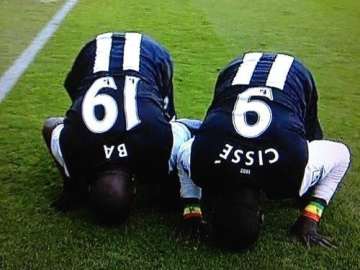 When Demba Ba made a relatively slow start to his Newcastle career in August last season, his manager Alan Pardew was quick to highlight the role Ba’s observance of Ramadan played in his lack of energy and lower performance standards.


To quote Pardew, his take on Ba was that the underwhelming start was ‘because of mainly Ramadan in my view’.

Originally, there was debate as to whether the Senegalese striker was failing to replicate his season in the latter half of the previous campaign due to the much fabled ‘second season syndrome’ which also applies to individuals as well as clubs.

Ba only featured intermittently in the opening few fixtures of the 2011/12 campaign, before bursting onto the scene spectacularly as the season moved into September and October, which but this theory to bed and showed that his true class remained, and fuelled more views that Ramadan had effected him more than he had let on.

Ramadan this year ran from the 20th of July up until the 18th of August, meaning that while it did not directly correspond with the beginning of the season it would have surely effected Demba Ba’s pre-season preparations. A good pre-season is vitally important, and Ba was clearly able to work through the test of observing Ramadan to maintain a good focus and build up some form which he has carried into the season.

This, then, is an intriguing debate due to Ba’s great start to this season. There was a lot of talk about his lack of goals between Cisse’s arrival and the end of the season, but a superb curling shot against Tottenham on the opening weekend put paid to that lingering question mark, and his crucial double in the recent Monday night clash with Everton almost single-handily helped the Magpies avoid defeat. So clearly this season, there appears to be no struggle against Ramadan.

Is it the case that Demba Ba has merely managed to cope better this year, or perhaps could it even be that his obervance Ramadan can help his football? Ex Tottenham striker Frederic Kanoute took part in a research based report from a German and stated that he felt in 2009 that it helped him remain in peak physical condition, and a higher level of focus.

This report carried out attempted to reach the conclusion that Ramadan should bear no ills over performance on the pitch, and other professional footballers such as Lassana Diarra and Karim Benzema also took part the surveys. Another explanation could also be the ever increasing work put in by doctors which enables players to work out a routine which allows them to remain hydrated throughout yet still maintain their faith during the month.

Whatever the answer, the first four games of this season has showed that Ba hs found a way, however, to get up to speed with the testing rigours of the Barclays Premier League despite Ramadan. This is a major positive for Newcastle, and Ba now clearly wants to be the main striker on Tyneside. Newcastle United fans can only hope that he maintains this level of performance, starting with the home game this weekend against Norwich City.