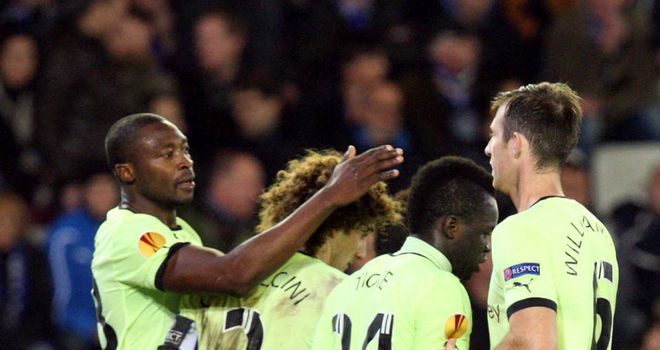 Newcastle United knew that a victory in their fourth match of the group against Belgian side Club Brugge could see them already through to the knockout stages of the Europa League.


However, after falling behind in the early stages of the encounter, fans could be forgiven for expecting the worst. But now, after a spirited fight back in the latter stages of the first period and thanks to strikes from Vurnon Anita and Shola Ameobi, fans of the Toon can be cautiously optimistic about still progressing. Just how far can the Magpies go in the competition?

Coupled with Bordeaux’s 1-0 victory over Maritimo in the other group game, Newcastle are now four points clear of the side in third, Brugge.

They sit top with eight points, the French side behind them in the other qualifying spot with seven. The two sides are still to meet in Bordeaux, with Newcastle’s other fixture a home clash with Portuguese outfit Maritimo.

A quick look at the previous results between the clubs would show that Newcastle have reason to be quietly confident of progression, knowing that a win from either game would see them through. They triumphed impressively 3-0 at home to Bordeaux with goals from Shola Ameobi and Papiss Cisse complemented with an own goal from the visitors, and earned a creditable draw in Portugal in their first group game, the game against Maritimo ending goalless.

So should they safely complete their mission of qualification, Newcastle will face a dilemma. They will be put into the draw with top teams from Europe, the competitions already holds such big names as Inter Milan and Bayer Leverkusen, not to mention the sides that will drop down from the Champions League (which could conceivably contain Chelsea and Manchester City).

Would Pardew opt for his strongest team in the knowledge this could hinder their league form?

Newcastle have made a solid start to the Premiership but know they must start picking up more points if they are to improve or even match last season’s effort of finishing fourth.

A brief look ahead to the schedule shows that should Newcastle reach the last 32, they would face a second leg a mere three days before a Premiership clash with Southampton, one where they would need three points. Further progression would only complicate matters more, as if they made the last 16 both legs would come directly before Premiership games, this time against Stoke and Wigan respectively.

Newcastle will know that, given a winnable draw, they can progress to the latter stages of the Europa League. But it is up to boss Pardew where their priorities lie, and you would not be surprised to see them exit the competition playing a weaker side to attempt to keep players fresh for the domestic matches. Whether the fans would agree with such a strategy however, is another matter.

Where do you think the club’s priorities should lie this season? Would you rather a place in the Europa League quarter-finals or be in contention for the top four come April?