This picture says it all really. In addition to having a paper thin squad in the first place, the injury statistics emphasize how unfortunate we've been this season. 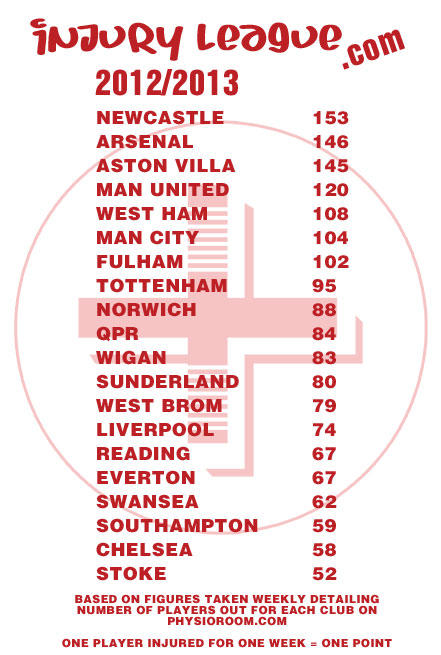 Given that the average age of our squad is relative young in comparison to most other teams in the Premier League, it’s hard to understand how we’ve been so unlucky. The youthfulness of the squad would suggest that the players would be fit and would recover faster. However, this is certainly not the case.

As a result of our lengthy injury list, our younger players have been forced to step up into the first-team this season, when they would not have necessarily played otherwise.

Pardew had this to say last week:

‘We had youngsters playing today who should be in the development side,’

‘We are missing too many of our top players and we need them back and quickly.

‘The truth is I’ve not put out our best team in a single game this season.’

In my opinion, the only way to counter this damning statistic is to buy and reinforce a squad which at the moment is really struggling to meet the demands of a hectic fixture schedule.

Why do you think we’ve been so unfortunate with injuries this season? Who would you like to see being brought in to reinforce our thin, young squad?

2 Comments on This Picture Says it All: the shocking injury statistics