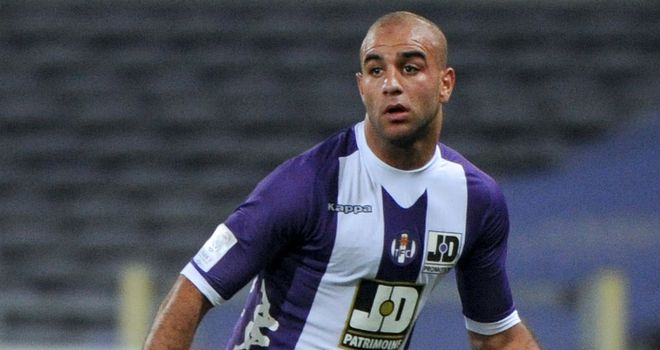 The transfer window opens in more than 3 months time, but the rumors about possible ins and outs have already started circulating and the latest name to be on the move is Toulouse’s Tunisian Center back Aymen Abdennour.

It’s no secret that Newcastle United needs to beef up their defence, in particular the central defencive position, with the likely departures of Club captain Fabricio Coloccini and possibly Mike Williamson. Barcelona on the other hand would want to have a long term successor to club captain Carlos Puyol.  If paper talk is to be believed then both Barca and Newcastle are in the hunt for Aymen Abdennour.

Abdennour is a 1.87m (6’1) tall center back who currently plays for French club Toulouse FC based in southwest France. Born in Sousse, Tunisia, Abdennour Started his career at Étoile du Sahel as a left winger and sometimes playing as a left back. Abdennour in 2010 signed a six month loan deal with German side Werder Bremen and made 6 appearances for the club before moving back to his parent club.

In the summer of 2011, Abdennour signed a 4 year deal with Toulouse which, given his excellent performances, was extended till 2016. Abdennour is also a regular for Tunisian national side and was the captain of Tunisian U21 side. During his time in France, he has played for 56 times for Toulouse scoring 3 goals and keeping 9 clean sheets this season (in all competitions) in the process.

Abdennour‘s strength lies in playing short passes and his ability to concentrate for the duration of the game. His versatility is an added bonus for the team that he is representing.

Apart from Newcastle United and Barcelona,  fellow Premier League side West Ham United have also been tracking the defender; if reports are to be believed then Barcelona naturally have the upper hand regarding the player, and havesupposedly already sent scouts to watch him play. Furthermore, they have invited him to train with them.

This is what the player sent about the links to the Catalan giants:

“Barcelona are a top team, but the invitation does not mean that I will sign for them.

It is no secret that I have been watched several times by them, but also by other big clubs. I have always dreamt of playing for a big club and by the grace of God I will achieve that.”

One thing is for sure: if Barcelona want Abdennour, they in all likelihood will get him. No team in the world can compete with the lure of playing for Barcelona or can afford to match the wages or the fees that they can. All we can hope for is that if there are any glitches and Newcastle’s interest remains real, they will be in pole position to pounce.

Comments Welcome. Have any of you seen him play before? What will he add to the team?