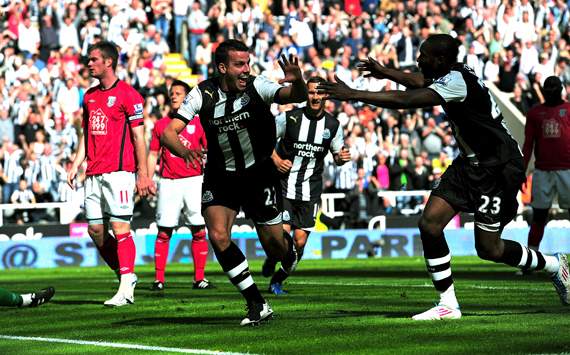 Newcastle continue their campaign tomorrow with a trip to high-flying West Brom. The Baggies, who have been playing very well for most of the season, sit 8th in the table on 44 points, an excellent return for a club normally known for being in a more or less permanent relegation battle.

Under Steve Clarke, however, they have been consistent, effective and in general fairly enjoyable to watch as a side.

Playing in a fluid 4-2-3-1 formation, against other mid-table sides like Newcastle they’ve tended to have Claudio Yacob and Youssuf Mulumbu anchoring midfield, allowing their front three midfielders – usually a combination of Chris Brunt, James Morrison and one of Graham Dorrans, Zoltan Gera, Peter Odemwingie or Jerome Thomas – to exploit space between the lines and either look for space in wide areas or play through balls in to a quick centre forward who makes the focal point for their attack – either Shane Long or Romelu Lukaku.

They keep a fairly deep defensive line, as none of their defenders are quick enough to keep an offside trap high up the pitch, and of their two fullbacks, Liam Ridgewell and Billy Jones, only Jones is decent going forward.

This deep defending will make it tough for Newcastle’s attacking players, most of whom rely on speed, and as such odds on the game are fairly tight – Betfair are offering fairly low odds each way, with West Brom slight favourites at 11/8 and Newcastle still considered to have a chance at winning with 12/5.

Newcastle only have one new injury to report on – sadly, Ryan Taylor has suffered another cruciate ligament injury and will be out for not only the remainder of this season but also most of next season. We can only wish him a full and speedy recovery, and it is hugely disappointing for a player who has always had talent but never had any luck with staying fit.

With only Taylor new to report on injury-wise, it is unlikely that there will be more than a few changes from the side that lost against Sunderland last week, and the most probably change would be Ben Arfa coming into the Starting XI in favour of either Marveaux or Gouffran.

It will certainly be a tough afternoon for the Magpies, but if they can keep either Long or Lukaku quiet and get past the midfield block of Yacob and whoever starts alongside him – Mulumbu is suspended, which is good news for Newcastle’s attacking midfielders – then fans can hope for a positive result.

Predictions for the game?