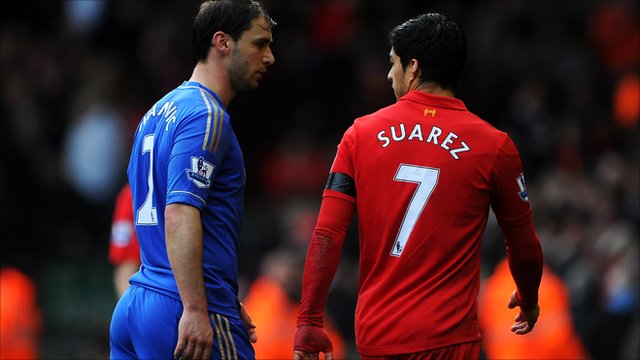 The Luis Suarez biting incident at Anfield probably means he won’t be playing at St James next Saturday which although is good for Newcastle isn’t good for football entertainment. Right now, 3 points are more important than seeing football played at its highest level so part of me is relieved.

The ‘Suarez bite’ was the first time I’ve seen such behaviour on the pitch. It got me thinking about strange ‘one offs’ I’ve seen over the years of watching Newcastle United. A few memories cropped up.

Sept 1964: During their promotion season, Newcastle had two very bad tempered home games. The first was against Coventry City. The fouling got so bad that the referee stopped the game and called the two captains aside. He told them both to gather their own teams together and sort themselves out.

For over a minute, two circles of players stood in their respective halves whilst the captains relayed the referee’s message to their teams. Shortly afterwards,  a Coventry defender made a lunging tackle into Newcastle’s then-free-scoring Centre Forward, Ron McGarry [ fyi: nicknamed ‘Cassius’ because he copied Cassius Clay’s  catchphrase– “I’m the greatest”. He also carried business cards which read, “Have goals, will travel”.].

Both players went flying. McGarry sprung to his feet looking for revenge and walked up to the Coventry defender as he got up. With clench fist, McGarry punched his opponent with a right hand uppercut, straight into his opponents bent down face (Clay would have been proud of).  The Coventry player dropped to his knees clutching his nose and jaw. He hadn’t see the punch coming. McGarry duly received his marching orders and walked off the pitch with an angry swagger. The game ended 2-0

1964-5: The second bad tempered match was the only home game that Newcastle lost that season. Newcastle lost 3-2, against Bury, to a goal scored in the 97th minute. It was a niggly game; tackles had been flying in from both sides.

I think I’m right in recalling that Newcastle levelled after going 2-0 down. We were on top when we were awarded a free kick deep in Bury’s half, attacking the Gallowgate End. The Bury wall would not get back ten yards. After nearly a minute of argy-bargying,  Newcastle were about to take the kick when Alan Suddick, walked up behind a hapless Bury player in their wall and pulled his shorts down around his knees. There the fellah stood motionless, not daring to bend over to reach for his shorts, in case the free kick was taken. Despite a roar of approval, Suddick was duly reprimanded. I can’t recall if he was sent off or not.

1967-68: Newcastle hosted Everton in another particularly bad tempered game. Alan Ball was in his prime. Ball was a magnificent player but also well known for his ‘red hair’ temper and a habit for making relentless nasty tackles.

Ball was running down the wing of the ‘Popular Side’ towards the Leaze’s End and noticed that John McNamee, Newcastle’s ‘take no prisoners’ Centre Half, running towards him. Fearing the worst, Ball kicked the ball into touch and ran for safety, off the pitch on to the cinder track.

Too late, McNamee had already started his ten yard mudslide and committed himself to meting out revenge on Ball regardless. It’s the first time I’ve seen a player tackled a good yard or so off the pitch, no ball anywhere near him and ceremoniously kicked into the crowd.

Tempers went from bad to worse. In the dying minutes of the game, Everton’s goalkeeper, Gordon West cleared the ball up field. As Newcastle’s, Jim Iley, ran past him, West kicked out and caught Iley needlessly. Fortunately for Newcastle, the referee spotted the foul and sent West off. The ball, although deep in Newcastle’s half, was technically still in play. The referee awarded a penalty. Newcastle scored and won the game 1-0.

1968-9: Newcastle played Glasgow Rangers at St James Park before a full house of 60,000+ supporters in the 2nd leg of the semi final of the Inter City Fairs Cup (now known as The Europa League Cup).  Newcastle scored to go 2-0 up with about twenty minutes to go, having drawn 0-0 in the first leg at Ibrox Stadium.

Before the two ties, Rangers were favourites to go through. Outraged, their fans invaded the pitch in their thousands. There was mayhem. Many of their supporters showed no fear of the police or their dogs. I recall seeing one young Rangers fan turn sideways to a dog-handler. He taunted to the handler to let the dog go to see if it could catch him. After 10-15 minutes the pitch was still crowded. A Ranger’s director came over the loud speaker and told the supporters that if they didn’t clear the pitch immediately that Rangers would forfeit the tie to Newcastle.

Newcastle held on to their 2-0 victory and went on to win their first and only piece of European silverware of note.

1983-84: Portsmouth 0 Newcastle 4 – what a bumper game, Waddle, Beardsley and Keegan (The Golden Triangle) at their best. Check out Beardsley’s sublime goal as he dummies two defenders. BUT, the most memorable moment in this match was a goal bound header by Mark Hateley. After a superb cross and leap, Hateley confidently saw the ball heading for the empty net. It dropped a yard or so in front of the goal and landed in a quagmire of mud. It got stuck! A Newcastle defender scrambled across the goal line and kicked the ball to safety. Hateley stood bemused, staring angrily at the offending mudpatch. He then proceeded to curse the pitch and started kick lumps out of it  like some deranged Basil Fawlty sketch.

1997-8: Newcastle played Coventry City away in a nothing sort of game. It was 0-0 when Shay Given collected a high ball and held it to his chest. Both teams (or so Given thought) ran up the pitch and waited for the ball to be hoofed up field. Given threw the ball down in front of him and stalled whilst he made his mind up where to kick it.

Unfortunately, Given didn’t notice that Dion Dublin was standing behind him. Seizing the opportunity, Dublin skipped in front of the stationary Given and slipped the ball into an empty net. Some quick minded Geordie blurts out, “F~~k  me, the only Irishman who doesn’t know where Dublin is!”

1995, 6 & 7: In September ’97, Tino Asprilla gave the best performance I’ve ever seen in a black and white shirt. He scored a hat-trick against Barcelona. But the magical moment, I recall most, was a ball floated over his head as he ran towards goal. He trapped the ball with in the apex of his neck and shoulder. He then slid the ball down his chest, waist and right leg without breaking pace. It was miracle football.

Let me eulogise about the first of two consecutive 4-3 defeats at Liverpool. Despite defeat, it’s probably the best game of football I’ve ever seen, alongside 5-0 over ManU, 7-2 over Spurs and the aforementioned 3-2 over Barcelona.

It’s the second Liverpool game where I witnessed two or three one offs.  Newcastle were dreadful in the first half – completely outclassed. As the half time whistle blew, a Newcastle fan ran along the side of the pitch, stripped off his black and white shirt and threw it to the ground in front of Kenny Dalglish’s feet as he remonstrated his anger at what he’d just seen.

With 15 minutes or so to go Newcastle were 3-1 down and ‘going nowhere’. Completely pi$$ed off, I left to make a dark night’s drive back to London. As I approached the car, I called my partner and told her I’d left early to miss the rush. She said, “What for? It’s 3 all!” I couldn’t believe it, I didn’t know whether to smile at the score or cry at my folly. “Oh no”, she interjected, “Liverpool have just scored”. It was a gloomy drive home. BUT…

During the first half there was one point where Asprilla trapped the ball on the touch line. A Liverpool player came hurtling in. Asprilla stood on top of the ball with both feet. In a millisecond he rolled the ball along the byline, avoiding injury whilst the lad in red sailed past him and the ball. A millisecond later he’s off racing toward the Liverpool goal – another moment of pure football genius.

16th April 1994: my greatest abiding memory and tribute to the vast majority of football fans who appreciate the greater good in the game.

5 years and 1 day after the Hillsborough Disaster, Newcastle played at Anfield. Liverpool was in deep mourning. Before the game, to respect to the dead and the grieving, Newcastle joined in with the Kop at the other end of the pitch. They clapped and sang to the chant of “Liverpool!” I couldn’t believe my ears. Before the players came on to the pitch, every fan in the ground stood and sang, “You’ll never walk alone!” My eyes were filled with tears of sorrow and joy.  (A tear still comes to my eye now as I write about that moment.)

For a few minutes, fans from both sides, joined in unison not only to pay their respects but to celebrate football. As the game kicked off, the partisan chants started off and ‘normal service’ was resumed for 90 minutes. Newcastle won 2-0 but the celebration wasn’t over.

After the game, as the singing resumed, a Newcastle supporter walked on the pitch of his own accord and placed a black and white wreath on the penalty spot at the away supporters end. The whole ground applauded and cheered. I’ll always remember the day that Geordies and Scousers sang together.

I’m a Newcastle fan through and through. Newcastle wouldn’t exist if it didn’t have the likes of Liverpool, Wigan and Sunderland to battle against. I respect every team Newcastle play. I do not hate any side.

Games are battles to be won by fair means. They are not wars to be won at any cost. At some level, I feel sorry for Suarez and that he resorted to play ‘outside the game’. He’s not the first and won’t be the last.

I hope this episode reminds Suarez to love the beautiful game that he is so eminently capable of playing.

5 Comments on The Ugly, the Daft and the Wonderful at Newcastle