In light of the recent PFA Player of the Year awards, in which Tottenham's Gareth Bale picked up both major honours, I was thinking to myself who, out of the Newcastle United playing staff, should be considered our 'Player of the Season'. 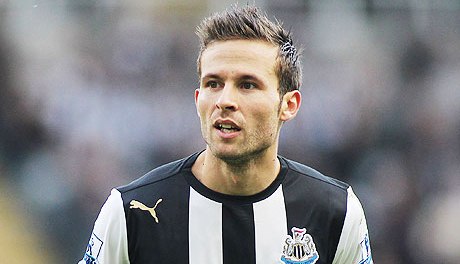 There is no doubt that this season has been a disaster for the club. Having gained international acclaim for our fifth place finish last season, this term, we have been reduced to ashes, and have virtually become the laughing stock of the league, epitomised by our 6-0 capitulation versus Liverpool on Saturday.

Though, as is the custom at the end of every season, someone is voted ‘Player of the Season’, decided by both the fans and his playing colleagues.

And unlike last season, where at least six players could have equally warranted the award, come May, it’s going to be more a case of picking the best of a bad bunch.

[Note that I’m disregarding the January arrivals – whether that would effect the outcome, is another matter!]

Yohan Cabaye, having picked up a team high 3 ‘man of the match’ awards, is the most obvious choice. Furthermore, he has taken on the captain’s armband in recent weeks during Coloccini’s absence. However, even the dreamboat himself has failed to refind the incredible form of yester-season.

Another possible alternative is Papiss Cisse. The Senaglese has managed to score 13 goals this season (18 if false ‘offside’ goals had been ruled correctly). Having scored an incredible 13 goals in 14 games last season, Papiss was tipped to be the next Toon legend to don the famous number 9 shirt, but things haven’t gone as smoothly since. Though he has struggled to really rekindle this form, one mustn’t overlook his contribution to the scoring charts, because without him, god knows where we’d be!

Finally, I’d like to suggest a lad who didn’t feature that much last season, but has really shown his worth this term: Sylvain Marveaux. He’s offered something this year which has been lacking from several of the more senior players: some much needed positivity. His performance against Arsenal in the 7-3 loss earlier in the season demonstrated perfected his battling mentality to fight for the team even when they are quite literally in the s***, which has unfortunately been a frequent occasion.

Or alternatively, if you look at the stats on Whoscored.com, Mike Williamson deserves the hallowed award! According to the stats accumulator,  he has been Newcastle’s outstanding player this season, amassing an impressive 6.5 successful aerial duels per game. Or following this pattern of rogue alternatives, you might even argue that Demba paid the biggest contibution to the team with his 13 goals before January…

Perhaps one of the biggest disappointments of this campaign has been the performances of those who had previously been considered our “figurehead” players: Fabricio Coloccini, Cheikh Tiote and Papiss Cisse.

As you can see, it’s pretty difficult to pick out a player and give him this title, as no-one has really played at their full potential. Let’s hope one of these lads can prove their worth in what is left of what has been, quite frankly, a dreadful season.

You can see a stats analysis spreadsheet of the nufc playing roster here (whoscored.com)

If you had to choose, who would be your player of the season?

3 Comments on Who Would Be Newcastle’s ‘Player of the Season’?