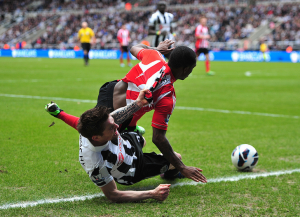 On Monday night, Gary Neville played devil's advocate and offered an alternative view on Newcastle's lack of success this season. Do Newcastle United have a few too many continental players or is it Pardew's inability/stubbornness to change his tactics that have failed him thus far? 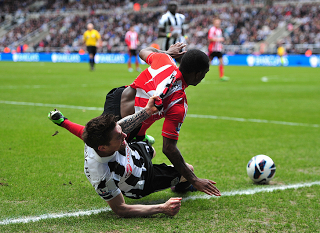 Tactically, Pardew has been shambolic. At the back end of last season, Newcastle went on a run of a form which saw them blitz everyone and everything in their path securing six wins in succession. Furthermore this was all whilst using the 4-3-3 formation which accommodated Demba Ba, Papiss Cisse and the creative input of Hatem Ben Arfa into a devastating attack. Chelsea, West Brom and Swansea were beaten away and Liverpool were beaten at home in hilarious circumstances. Pardew could do no wrong even when we succumbed to an embarrassing defeat away at Wigan.

However, this season I don’t know what sport Newcastle have been playing. I’m unfamiliar with this long ball technique Pardew has employed that sees the ball launched up to Papiss Cisse on his own? It doesn’t work. It won’t ever work. Pardew reverted to a 4-4-2 formation at the start of the season in order to satisfy Ba’s desire to play in the middle. That decision was suicidal and cowardly by Pardew, no player is bigger than the club and no player should have the right to influence a manager’s decision. Ba justified his argument by scoring nearly all of Newcastle’s goals at the start of the season but his selfishness cost Newcastle dearly. It cost them when he demanded to be moved into the middle and when he jumped ship in January.

Papiss Cisse is a goalscorer. He is paid to score goals. Pass the ball in the box to him and he will probably score. So why didn’t we do this? Pardew’s man management has been very poor, he admitted that the two could not play together so why didn’t he have the bottle to drop one or sign another striker in the summer? Why persist for twelve months? Answers on a flippin’ post card please!

When Ba did depart, Pardew reverted to a 4-2-3-1 formation which with our players should suit us. However, the form of our players has been dire, players such as Tiote has seemingly lost the ability to pass and Coloccini has looked a shadow of the enforcer he was last season which won him a place in the PFA team of the year.

Pardew’s ineptness tactically has made the toon suffer. Playing players such as Gutierrez at left back on derby day was suicidal, playing Sissoko in centre attacking midfield when he is a centre defensive midfielder is idiotic and playing Shola on the wing earlier in the season was pathetic. Play the players in the right positions Alan and we might have a chance of actually winning a game!

Since the arrival of the french imports, Newcastle improved gradually and put together a decent string of results. However, the last few games have been utterly shambolic from a United point of view. Losing a home derby to Sunderland is inexcusable and in the manner we did, sackable.

Losing to Liverpool 0-6 at home is inexcusable and in the manner we did, sackable. Finding ourselves in the relegation fight is disheartening. We deserve to be there on the standard of football and inability to see games out. But when you compare NUFC’s squad to the teams in and around them it’s laughable. Do the players  know what football means to geordies, to this city? Perhaps Gary Neville was right.

The only way they can prove they do know is by staying up and starting next season in style. If we fail? God help us.