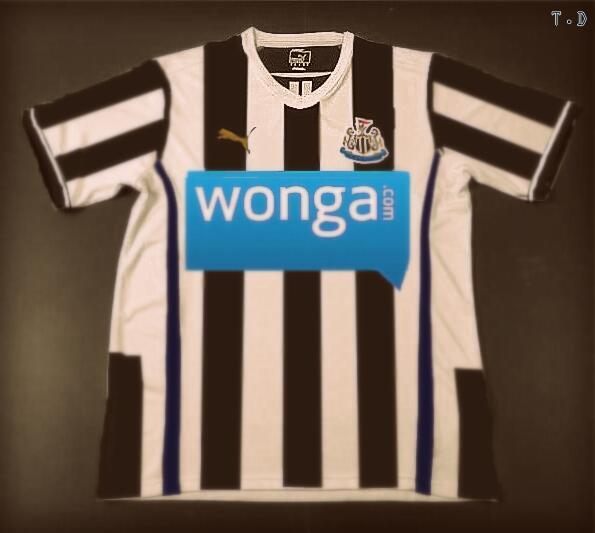 Is this the new home kit?

Last week, leaked images of Newcastle's new home, away and third kit surfaced on the twittersphere as well as other major footballing sites, most notably epltalk.com.

Though the images didn’t include the new shirt sponsor, Wonga.com, a new photo has today been released onto the networking site that integrates not only the aforeseen design, complete with the bizarre blue details, but also the controversial Wonga logo.

It is similarly styled to this season’s home kit, using the same stripe width, but has also added a thinner blue stripe down the side, perhaps to compliment the stark blue logo.

In my opinion, it looks quite cheap. I don’t believe that the club made the right decision in choosing the financially rewarding option of Wonga over a more appropriate and popular business. Maybe this frutration is influencing my opinion of it, but I nonetheless think it looks tacky.

The kit is due to be released officially in the first week of August, but there’s generally a lot of hype during the build up to its unveiling, comprising of numerous ‘leaked’ photos of the kit, many of which prove to be wrong come August.

But this one looks pretty genuine. We’ll have to wait and see.

Do you like this supposed new home kit? Or do you think the new Wonga logo cheapens the history of the shirt?