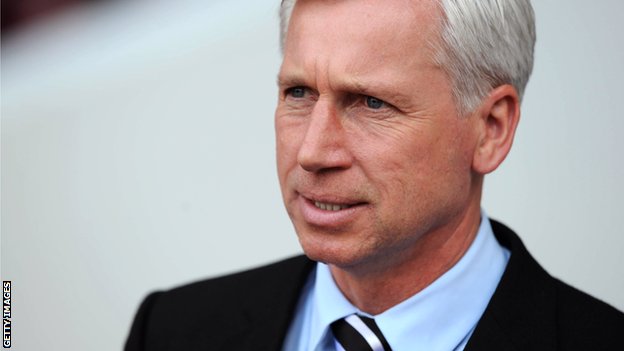 The fans are already thinking about the first game of next season and following the news from the club today that Pardew is here for the long haul, many Geordies are trying their best to be optimistic and look on the bright side.  At the moment however, the bright side is lit by one of those torches you get in a pound shop car care kit – dim and flickery at best.

A football team should reflect the personality of the manager and at the very least, you’d expect the style of football played to reflect the manager’s core principles.  Whether it’s the fluid attacking football of Roberto Martinez, play-it-long and win-the-second-ball-percentage-football of Tony Pulis or patient build up, pass, move, killer pass football of Brendan Rogers, anybody watching their teams play can immediately see what the manager is trying to achieve.

In Alan Pardew’s case however, try as I might, I cannot work out what he wants or what his footballing beliefs are.  Long balls that come straight back over the half-way line and put our own defence immediately under pressure, effective short passing moves in areas that cause the opposing defence no problems at all, wingers who play flat balls at 45 degree angles straight to the feet of opposing defenders or lobbed crosses with no pace straight into the hands of the opposing goalkeeper.

I need not mention Pardew’s thoughts on set pieces, or should I say, his apparent belief that they are an inconvenience.  I fully expect him to be briefing the officials before every game next season, asking them to give the opposition a goal kick if the ball ever goes out for a Newcastle corner.  It’ll save time and give Papiss Cisse more time to score in normal time instead of waiting until the final minute of injury time.

The perfect examples of ‘a team reflecting the philosophies of the manager’ are those of Ossie Ardiles and Kevin Keegan.  Ardiles could have been successful at Newcastle had he the money to bring in players that suited the style he had so obviously impressed on the players he had.

Unfortunately, the average age of his squad was about twelve and although Lee Clark and Steve Watson et al would go on to become very good Premier League players, they were simply not ready to be lynch pins in Ossie’s free flowing and fluid attacking set up.  The one player he did sign, Gavin Peacock, became one of the main reasons Newcastle avoided the drop in 1992 and went on to promotion in 1993. Who knows what his other signings could have achieved had he been able to make any?

Nearly every single one of Kevin Keegan’s signings had an air of Kevin Keegan himself.  The likes of John Beresford, Robert Lee, Scott Sellars, Andy Cole, Phillipe Albert, Les Ferdinand, David Ginola, Peter Beardsley and Tino Asprilla bled the Keegan philosophy and as such, responded perfectly to the way he wanted his team to play.

It wasn’t that they were particularly amazing players (granted, some of them were) it was more that they fitted Keegan’s values perfectly.  He bought each one because they could do the job he wanted them to do.

How much is he saying ‘I need a strong defensive stopper who can play’ and how much are the people upstairs introducing him to their new signing and telling Pardew to accommodate him in the team somehow.  It seems that far from giving anyone a list of the type of player he needs to reinforce a successful gameplan, he is being presented with a batch of promising, up and coming, sell-them-for-a-profit players which he has to try and squeeze into whatever system seems appropriate at the time.  The fact he seems completely oblivious to each player’s strengths seems to bear this theory out.

It leads to playing Gouffran out of position and then after he’s ran his heart out for the team, substituting him for a defensive player.  Jonas being told to scurry about the pitch and look like he’s being effective without actually bringing anything but a bit of energy to the party.

Sissoko being told not to pick the ball up from deep and bomb forward causing panic in the opposition midfield before spraying it wide and arriving in the box late à la Yaya Toure.  Cabaye not being used as a central playmaker for whom space is made by those around him to give him the choice of taking it forward himself or playing a clever ball in behind the full back for Marveaux to bomb onto.  No, on the evidence of last season, none of the players’ strengths seem to have been utilised at all nor the opposition’s strengths snuffed out.

Cisse has looked like a lost puppy at times up there on his own, isolated, unable to hold a ball up to allow the midfield to join him and unable to play an all action role which involves closing defenders down quickly.   When Cisse finally gets presented with a chance, and a golden one at that, he more often than not fires it high and wide – the actions of a man who knows it is his sole responsibility to score the goals, regardless of form or fitness.  Why play long balls or even cross a ball into the box when we lack anyone in the team who can win and head the ball in the right direction?  Why play with wingers when most of our players prefer to play it to feet and have no little amount of skill?

It seems that Pardew’s recent vote of confidence is more evidence for the fact that no other manager is going to accept being told to accommodate players bought by the club with their input into what players are actually needed falling on deaf ears.

So did Pardew hugely overachieve the season before last and then only slightly underachieve in the one just ended?  For arguments sake, let’s say we picked up maximum points home and away against relegated Reading and Ba hadn’t scored that own goal against Sunderland (scenarios not too unrealistic) – Newcastle would have finished 9th.

Most Geordies would have been happy to take 9th at the beginning of the season if they were told they’d lose Demba Ba in January and not replace him.  But it’s not so much the issue of a few bad results, it’s the fact Newcastle haven’t put in a performance of any quality in the league bar the home game against Chelsea, when Sissoko was playing his natural role instead of the number 10 which is obvious to anybody with eyes, doesn’t work.  Pardew’s fan-led interview with Radio Newcastle was mysteriously cancelled last week with no new date set.

Then in a recent interview he came out with the phrase, ‘I love being the manager’.  It reminded me of the desperation from that scene in The Inbetweeners when Jay’s first girlfriend told him she was breaking up with him, ‘Please, just tell me what to do and I’ll do it. Please don’t leave me.’

But, alas, Mike Ashley has given Pardew the vote of confidence and moving on, in Pardew we must trust.  At least for the half dozen games next season.  If he was going to get rid, the time to do it was after the bewildering home defeat against Reading which was the last in a run of eight games were just four points were gained.

Even Souness managed seven points from his last eight games in charge before he got the boot.   You could argue that most managers have failed at Newcastle because the players haven’t been good enough and they’ve had to do their best with a bad hand.  Pardew however has some excellent footballers at his disposal yet seems unable to get them to play well in both halves of a game.

So, as I said before, the team should reflect the personality of the manager and unfortunately, last season it did; desperate, spiritless and a big dollop of covering up the cracks by trying to look like it knows what its doing.

2 Comments on In Pardew we Trust?