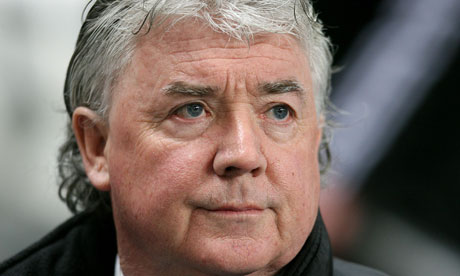 These words, as reported by Matt Dickinson of The Times back in 2012, are the words of our new Director of Football. As ridiculous as they seem, we must not underestimate these threats. Because he’s done it before…

Last night, Joe Kinnear demonstrated exactly why he’s so hated in the footballing world. Not only did he mispronounce the surnames of some of Newcastle’s most well-known players, but he also couldn’t help but name-drop throughout the interview, talking of his invaluable international experience (in the footballing havens of India and Nepal), and his close links with Sir Alex.

So, he claims that he is to assume the role of Director of Football, specifically designed to unearthing transfer prospects and dealing with the contract negotiations. However, there is a very worrying pattern that may just suggest he has an ulterior motive. And this can be seen in his time at Luton.

He has previously been Director of Football at two other clubs, one of them being Oxford United, the other Luton Town.

After being appointed to this heralded position at Oxford United back in 2001, he failed to make an impact and was incredibly unpopular with the fans. After just three months in the job, he resigned, citing ‘health problems’ as the principal reason for his departure.

However, it appears as though his pride had got the better of him and it was instead his lack of involvement that spurred on something of a forced resignation. Just weeks later, he was able to miraculously overcome the crippling health problems that had made his time as Oxford so unbearable and was handed a similar role at Luton Town.

However, this is where it gets interesting.

On arrival, he used his newfound power to demote the then-manager Lil Fuccilo before appointing himself manager of the team. Luton were relegated later that season.

Now, it is unlikely (I hope) that Kinnear will have the power to do the same thing at Newcastle. But seeing as Ashley and Kinnear are such good friends, it’s certainly worth thinking about. Kinnear was never sacked from Newcastle, as he repeatedly points out, and was instead forced to resign due to genuine health problems.

It certainly appears as though this vile man has an air of grandeur. I can’t really understand where he’s got it from, however. He did well at Wimbledon, admittedly, but it in now way justifies some of the ridiculous comments he’s made in the past few days. Apparently he has “got more knowledge than anyone at Newcastle as a football manager”. So, this eventuality could well be in the back of his mind.

These past few days have, quite frankly, been a nightmare for Newcastle. It has been a PR disaster which has effectively made the club the laughing stock of the Premier League.

Whether history will repeat itself remains to be seen, but what we must not do is underestimate the shamelessness of this man. As we’ve seen over the past few days, he talks a lot of rubbish. However, in many cases, it’s not just talk. He has shown before that he is perfectly happy to compromise his own image in order to get what he wants, and he could very well do it again.