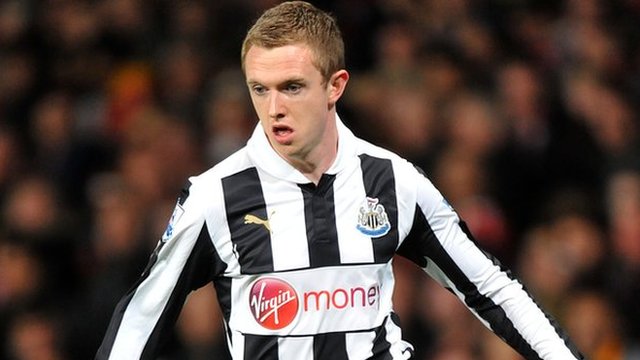 Ferguson who has still got three years to run on his current contract is valued at £1.5 million by the Magpies and the chronicle understands that Newcastle will listen to suitable offers for the Derry born midfielder.

The 22 year old left sided player is also wanted by Birmingham on loan who are managed by former toon hero lee Clark. However the championship side are only looking to get Ferguson on a season long loan rather than an outright sale.

Ferguson who has come through the ranks at Newcastle, dreams of playing  regular football with the North-east club, but he may find it hard to break into team with many left sided players above him in the pecking order. The competition for places saw him only make 14 first team appearances for the Magpies.

Ferguson would also want to be playing regular football if he wants to add to his eight Northern Ireland caps, especially after what his national manager and ex-Newcastle striker Michael O’Neil said:

“He’s at an age now where he needs to play.”

“From his point of view he just wants to continue playing.

“When he goes back to Newcastle he’ll hope to be making inroads into the first team again. If not then he’ll probably look at his options with regards to going out on loan and playing elsewhere.”

Ferguson is a well-liked member of the dressing room and to lose him would be a shame. Ultimately, however, he’s at an age where first-team football is a priority and he may not be getting that at Newcastle.