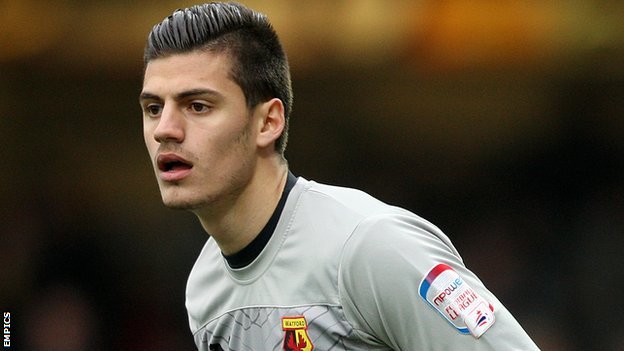 Watford's Jonathan Bond has been linked with Newcastle

But after a much more convincing performance at the weekend against Fulham, is it really necessary to ‘panic-buy’, as the 11pm transfer deadline draws ever closer? Maybe not, but despite this optimistic proposition, most Newcastle fans will be up in arms if Kinnear doesn’t bring in a player today.
Perhaps a signing would not only be necessary to strengthen the squad, but also to ease the hate towards our director of football.
Newcastle have been linked with a host of players this summer, even unsettled Manchester United striker, Wayne Rooney! However that story, taken off the Sports Direct News website very shortly after its publication, had no substance what so ever.
The latest we here about Bafetimbi Gomis is that he is now staying with Lyon; that’s according to Sky Sports News. This is reportedly due to Lyon president Jean-Michel Aulas recognising that the clubs strike force is limited.
Another developing story involves Blackpools Tom Ince. The Daily Mail reports that Newcastle, Everton and Tottenham Hotspurs have strong interests in 21-year-old winger. However, Ince trained at Blackpool this morning, and judging by the pictures shown to us by Sky Sports News, he looked very content.
The future of Yohan Cabaye remains an uncertainty. This is following Alan Pardew stating that Cabaye could still leave the club.
Cabaye played his first Premier League game this season for Newcastle, after refusing to play in the Magpies last two encounters with Manchester City and West Ham.
However, with Ozil having undergone a medical at Arsenal, surely this means Newcastle United fans do not need to worry about the departure of the French international to the Gunners? Whilst this is a comforting thought, I doubt that Arsenal is the only club that have been interested in the central midfielder.
In other news, Sky Sports have revealed in the last few hours that Arsenal have made an enquiry for Chelsea’s Demba Ba. This should worry Mike Ashley, as Ba was reportedly Newcastle’s plan B signing if the Gomis deal was to be unsuccessful (according to The Chronicle).
Joe Kinnear was sighted watching Marseille player Andre Ayew at the Stade du Hainaut in Valenciennes, however there have been no enquiries. Despite this, it is said that Newcastle target Florien Thauvin has passed a medical at Marseille with a €12.7m fee agreed. Couth this potentially trigger a move for Ayew?
Another rumour circulating on Sky Sports news is Newcastles reported interest in Watford goalkeeper Jonathon Bond.
By the time this article is published, Newcastle may have signed someone, who knows! All we do know is that if we are going to bring a player in, we have less than 10 hours to do so. Furthermore, if no singings have been made come 11pm tonight, could it be time out for Kinnear? All will be revealed!
Do you think Newcastle will be making any signings this Summer?
Written by Henry Winter