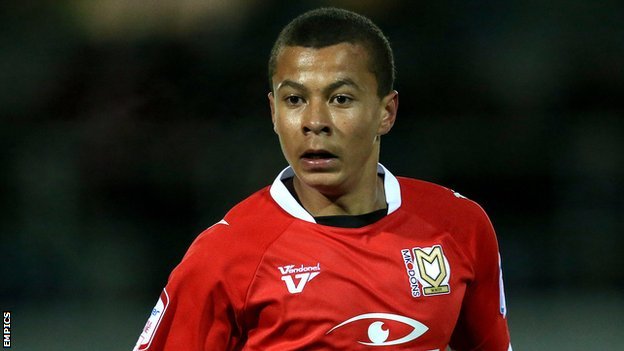 Following a disappointing summer in the transfer window, Newcastle are on the hunt for youth to deepen the squad. The latest to be linked with a move to St James' Park is Milton Keynes Dons' Dele Alli.

The 17 year old plays predominantly and has made a name for himself following some scintillating displays in the FA Cup and League Cup against Cambridge City and Northampton respectively. The youngster notched a fine goal in Dons’ First round replay against Cambridge on their way to a 6-1 victory.

The Englishman is a product of the MK Dons youth system and has managed to break into the first team this season, starting the clubs first two games in the Sky Bet League 1. He has represented his country 8 times at U17 level.

Newcastle scout Graham Carr is reported to have been at the Sixfields Stadium to watch the youngster as MK Dons took on Northampton in the Capital One Cup. Newcastle face stiff opposition however as Liverpool and Arsenal have announced their interest in signing Alli.

Alli is unlikely to go cheaply either. Dons boss Karl Robinson has said that will cost ‘millions’ following his ‘scary’ performance in the League Cup.

“The kid is destined to be a great, great player. But great players have a time span they have to go along,” said Robinson.

“His performance against Northampton, that’s scary. At 17 years of age to do that. Sam Baldock [who left MK for West Ham and is now at Bristol City] at that age wasn’t conducting himself as Dele has just done.”

Would you be happy to see Dele Alli at Newcastle or is a more experienced player required?