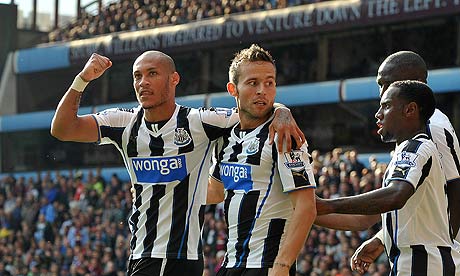 For the first time in a long time, I was looking forward to watching Newcastle play after only seeing the team sheet. Steven Taylor and Cheick Tiote were nowhere near the starting XI and the middle trio everybody was hoping to see was on display with Sissoko deployed deep rather than pushed forward.

And it worked a treat as so many expected it to. Pardew – aided by the arrival of our sole acquisition Remy – adopted an attacking line-up against a Villa side that was there for the taking. Attacking wise, Villa are a threat but defensively and in the middle they’re very lightweight. From the outset, we controlled the game and asserted our authority almost as if it was a home game.

Anita played the simple stuff and offered an outlet and Sissoko attempted to run the show with his footwork and ability to spread play. Anita and Sissoko look to be a very astute pairing in the centre of our midfield, Anita covers well and offers that bit of pace and annoying pressure that will upset opposition midfielders. Cabaye, in his first game back after his little tantrum looked closer to his old ways than he has in a while.

But the star of the show was Mr Ben Arfa. After his dazzling display against Fulham, it was the simple stuff he achieved today that got us off to a good start when he tapped home Remy’s cross via a Cisse deflection. It was a deserved goal after dominating the ball in the early section of the first half.

Debuchy coped well with the tricky customer of Agbonlahor and offered support when necessary to Ben Arfa who made better decisions this and did not give the ball away as much as he has done in the past. On the opposite wing, Remy looked incisive and eager to play well. It was his run that led to the first goal. Although he did fade, I was impressed by what he could potentially offer this United team. We want goals but this loan deal could see more assists than we expected from the former Marseille man.

We battled when we needed to and we did so in a composed manner. Mapou Yanga-Mbiwa was assured alongside Fabricio Coloccini at the back although the Argentine was guilty of a few nervy passes towards the end of the first half. They nullified the threat of Villa’s trio until Krul’s error led to Benteke’s goal in the second half.

The Dutchman will make amends for sure in the upcoming matches and it was an unusual error from the normally ever reliable stopper. For once, Newcastle played well in two halves of the game rather than one and it was refreshing to see United want the ball and want to do something with it.

I pray that the demons of last season are banished and that parity is restored. Once Papiss Cisse starts scoring, we’re laughing our way to the top half of the table.