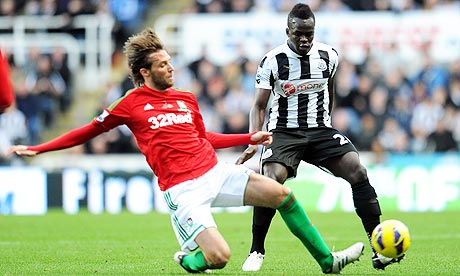 The Magpies will face Swansea City in a Premier League encounter at Liberty Stadium on Wednesday.

Alan Pardew is hoping that his club will continue the form that has propelled them to an impressive record so far this season. Newcastle had an excellent month of November, winning all four Premier League matches, which included a convincing win over Chelsea, as well as more hardy ground-out victories against Tottenham, Norwich and West Brom

They hope to take advantage of a  Swansea City side who will be recovering from an outclassed 3-0 defeat to Manchester City, and may be starting to feel the effects of playing European football.

Michael Laudrup’s Swansea side have only won one match in their last five in the Premier League, including a bitter 1-0 loss to Welsh rival Cardiff City back on November 3rd.

Concern With Injuries and Fatigue

To make matters worse, they have been forced to deal with injuries to their top two strikers. Spanish international Michu has been out for the last month with an ankle injury and will not play on Wednesday.

And Wilfried Bony, who was heavily linked with Newcastle in the Summer before opting for a move to South Wales, is an injury worry (thankfully, for Newcastle). Suffering from a hamstring injury in a Europa League match against Valencia last Thursday. he is expected to be out at least another week.

Spanish defender Angel Rangel suffered a calf injury in the same match and is out indefinitely.

Like Newcastle last year, The Swans appear to be having difficulties adjusting to the condensed schedule analogous to Europa League qualification. Injuries and inconsistency have contributed to the club’s comparatively unimpressive form this year; they currently stand 13th in the table, currently.

The Magpies must feel like they are going to Liberty Stadium at the right time. But Newcastle lost twice to Swansea last season, and they should expect a difficult match on Wednesday.

With their top two strikers out with injuries, Michael Laudrup will need his best players to step up in their absence.

So far this season, Swansea’s goalscoring has come from every position. Wilfried Bony is the team’s leading scorer with four goals. Michu only has two this season after scoring 18 last year in the Premier League.

Dutch goalkeeper Michel Vorm was left out of Sunday’s match against Manchester City, but should return against Newcastle.

Danish manager Michael Laudrup has preferred a more ‘continental style’ 4-2-3-1 formation during his time in England, combined with an emphasis on possession and short passing.

However, Laudrup did experiment with a 4-4-2 formation against Manchester City on Sunday. Young Spanish striker Alvaro played up front, alongside midfielder Pablo Hernández in a secondary striker role.

Alan Pardew has been tinkering with the formations on a weekly basis so far this season, but it appears likely that Shola Ameobi will partner with Loïc Rémy up front again.

Both Swansea and Newcastle have played in many close games this season, and Wednesday’s match will likely come down to the wire. Both clubs are known for being well-organized and attack-minded, which should make for an engaging 90 minutes.

Newcastle are infamous for lack of consistency. While they can be seen outclassing Manchester United away one week, a home loss to Stoke the following Wednesday is never off the cards.

However, having won only one of their last 8 games (in all competitions), I cannot quite see Newcastle’s run of form ending just yet. Travelling to SouthWales will be one of the more challenging away days this season, but with the front two of Michu and Bony missing, they lack strength up top. And with Loic Remy and Yoan Gouffran on blistering form, I think it will be a fourth victory on the bounce for Newcastle.