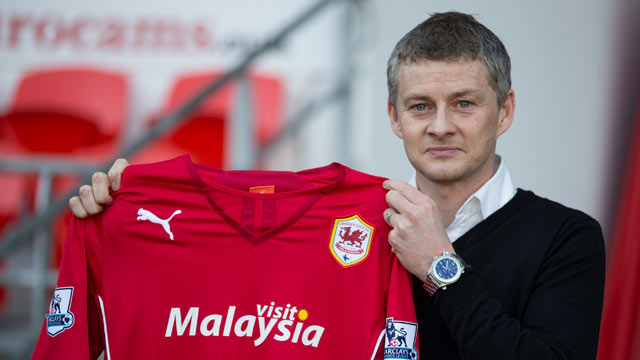 Newcastle United will hope to get back on track when they face Cardiff City in an FA Cup third round match-up on Saturday. The Magpies are coming off consecutive 1-0 defeats to Arsenal and West Bromwich Albion in league games.

Newcastle were eliminated by lowly Brighton and Hove Albion FC at this point last year. Alan Pardew will be hoping for a better effort from the club this time around.

They will have to do it without French defender Mathieu Debuchy who was given a red card in Wednesday’s match against West Brom and is suspended for the match.

Worse still, central defender Fabricio Coloccini appears to have suffered a serious knee injury in the same match and could be out as much as six weeks.

This game will be the first match for former Manchester United forward Ole Gunnar Solskjaer as Cardiff City’s new manager. He takes over a club that has not won in four matches overall. They currently sit in 17th position in the table, just one point out of the relegation zone.

Solskjaer replaces Malky Mackay who took the club to the Premiership this season. Mackay’s departure came as a surprise to many at the time because the club until recently was playing well and avoiding the relegation battle.

However, the Scottish manager was fired after a 3-0 defeat to Southampton on December 27th. Owner Vincent Tan has silenced some dissenters by appointing the recognizable Solskjaer, at least for now.

Solskjaer won two league titles in charge of Molde FK in Norway and is widely regarded as an up and coming manager. He faces the difficult tasks of insuring survival in the Premier League, as well as managing the unpredictable Vincent Tan.

Newcastle’s opponents have lined up in a 4-2-3-1 formation for most of this season under Malky Mackay. Fraizer Campbell has been their striker for most of that time. Campbell and midfielder Jordon Mutch lead the club in goals with four each.

Cardiff defender Andrew Taylor has been battling injuries and is doubtful for Saturday’s match. Craig Bellany is out with a hamstring injury and is unlikely to play as well.

As mentioned, Debuchy will not be available to play against Cardiff. Steven Taylor should replace him at right-back for the match.

And with Coloccini out long-term due to a knee injury, Mapou Yanga-Mbiwa is an obvious replacement in the centre of defence. The €8 million signing from Montpellier has played well when called upon this season.

Newcastle lined up in a 4-3-3 formation against West Brom but Alan Pardew is likely to rest several key players against Cardiff City this time around. The Magpies will face Manchester City at St.James’ Park on January 12th.

The Cardiff City players will be looking to impress their manager in his first game in charge. While, Ole Gunnar Solskjaer will be under immense pressure to deliver after the firing of the popular Malky Mackay.

Newcastle beat Cardiff City 2-1 on October 5th in their only meeting so far this season. Loïc Rémy scored twice on that day. The Magpies have not gone past the fourth round of this tournament for some years now. However, the club has a good record in home games this season.

Newcastle will come out with a much better effort against a Cardiff City club that is still very much in crisis mode. The Magpies will overwhelm their opponents on this day.