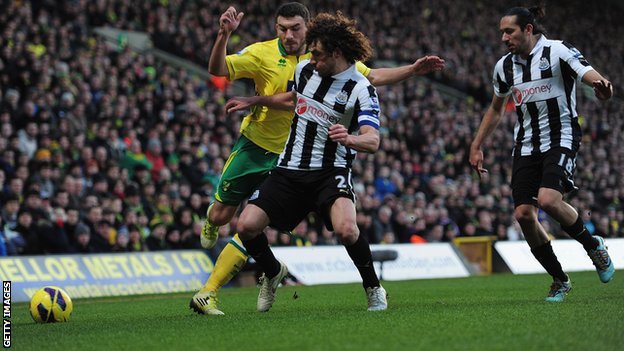 Newcastle United are hoping that a win against Norwich City on Tuesday could move them back into contention for a Europa League position for next season.

The Magpies put an end to a four-match losing streak with a convincing 3-1 victory against West Ham United last week. Newcastle currently sit in eighth position in the table, seven points behind Tottanham Hotspurs for fifth.

The Spurs will be facing Manchester City at White Hart Lane on Wednesday. This could be a good chance for Newcastle to cut into that lead.

They will face a Norwich City club that is in 12th position in the table, but only five points out of the relegation zone. Despite spending heavily in the summer, Chris Hughton’s club has had a difficult time scoring goals this season.

On a side note, Newcastle are currently sitting on 299 Premier League wins. A victory against Norwich City on Tuesday would be a historic footnote. With the transfer window expected to close at the end of the month, this could be the last match for several players.

Norwich City have only scored 18 goals in 22 matches this season. Only Crystal Palace and Cardiff City have scored fewer goals this season in the Premier League.

Both were expected to strengthen the attack, however the squad does not manufacture enough scoring chances for the two strikers.

Hooper has recovered from a slow start but only has five goals so far this season. Wolfswinkel missed most of November and December with a foot injury and has had a difficult time adjusting to the Premier League. He has only one goal this season.

Chris Hughton has used the 4-4-2 formation for much of the season. Hooper and Wolfswinkel are expected to share the striker duties up front for the Canaries.

Jonás Gutiérrez, who moved to Norwich City on loan this month will not be eligible to play against his parent club on Tuesday.

English defender Michael Turner is battling a hamstring injury and is expected to be out longer. Midfielder Jonny Howson has not played since December with a back injury and is unlikely to return against Newcastle as well.

Alan Pardew has used the 4-2-3-1 formation for the last few matches, with Loïc Rémy as the lone striker. Fabricio Coloccini remains the club’s only real significant injury. While, right-back Mathieu Debuchy returns to action after serving a three-match suspension.

Newcastle beat Norwich 2-1 in their earlier meeting this season on November 23rd. Rémy and Gouffran were on target on that day. Newcastle have won three of the five Premier League matches since Norwich City returned to the top flight in the 2011-12 season.

Norwich City is in poor form, having won only once in their last seven Premier League matches. However, the Canaries are coming off a win against Hull and they will have the advantage of playing in front of their home fans.

The Magpies re-affirmed that they are a quality club last week with a decisive victory against West Ham. And they will go into this match knowing that they must beat Norwich and Sunderland this week in order to get back within striking distance of fifth.

Both clubs have been eliminated from the FA Cup and as a result have had a week off to rest and nurse injuries. With both clubs at or near full strength, Newcastle should be able to overwhelm their opponents on Tuesday. Newcastle come away with their 300th Premier League victory.