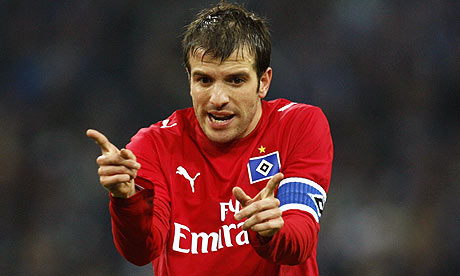 The Magpies recently sold their best midfielder Yohan Cabaye to Ligue 1 champions Paris Saint-Germain and are looking at someone of similar ilk to take over that role.

Van der Vaart for his part has been one of the star performers for a Hamburg side that is currently occupying last of the automatic relegation spots in the Bundesliga. The North German side is currently on 16 points after 19 games.

Despite that the midfielder has racked up impressive statistics with eight goals and five assists in 18 appearances in all competitions. Even last season the former Ajax man impressed after moving to the Imtech Arena with five goals and nine assists in 28 league appearances.

A return to the Premier League could appeal to the former Tottenham man especially if The Dinosaur are relegated. The midfielder excelled at Spurs with 24 goals in 63 league appearances. He also helped the North London club UEFA champions League Quarter Finals in 2010-11 season.

Even though the move makes sense the Magpies would have to seriously alter their transfer policy for this to come through and Van Der Vaart could be tempted with a move to St. James’s park with other Dutch colleagues already there.

Apart from Newcastle a host of other clubs are also keeping an eye on the 109 times capped Netherlands international including Monaco, Galatasaray and AC Milan.