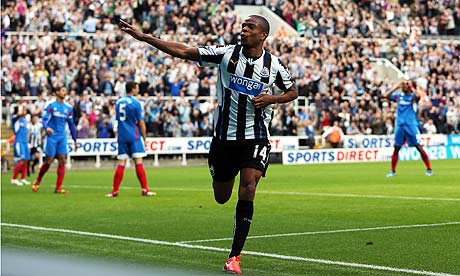 Newcastle United will be looking for a second consecutive victory when they travel to Hull this weekend.

The Magpies lifted the storm clouds last Sunday when they beat Aston Villa 1-0 at home, thanks to a late goal by Loïc Rémy. It was only their second win in 2014.

Alan Pardew’s club will be facing an increasingly confident Hull City side that currently holds down 11th position in the table. They are six points away from the relegation zone.

Steve Bruce’s club beat Cardiff City 4-0 away last weekend. They followed that up with a 2-1 win over Brighton and Hove Albion in the FA Cup on Monday.

The Tigers beat Newcastle 3-2 at St.James’ Park in September. The Magpies have not beaten Hull City in their last five contests going back to 1990.

Newcastle was lifted by the return of Fabricio Coloccini, Cheick Tioté and Loïc Rémy to the line-up last week. However, Davide Santon and Hatem Ben Arfa picked up undisclosed injuries and did not play against Aston Villa.

Santon and Ben Arfa remain doubtful for Saturday. Sylvain Marveaux was left out against Villa as well, but will be available to play against Hull City.

Hull City defender Paul McShane will be out longer with an ankle injury. Tom Huddlestone, Liam Rosenior and Alex Bruce are all battling minor injuries and may be unavailable against Newcastle.

Steve Bruce’s club defends well as a unit, having conceded only 31 goals in 27 matches. Only Chelsea, Arsenal, Manchester City and Everton have given up fewer League goals this season.

And they score by committee, Hull have had 14 different goalscorers this season. Jelavić, Robbie Brady and Jake Livermore lead the club with three goals each.

Alan Pardew is likely to rely on a 4-4-2 formation for the rest of the season. Rémy played with Papiss Cissé to start the match against Aston Villa. Luuk de Jong came in for Cissé when the match was still scoreless.

Youngster Paul Dummett should play in Santon’s position if the Italian is not fit enough to play. Yoan Gouffran and Moussa Sissoko should occupy the wings. If healthy, Arfa Ben Arfa would likely start on the bench.

Hull City have been poor at home recently, having won just once in their last six matches. And their League form since the beginning of the year has resembled that of Newcastle. The Tigers have won only two of their last eight League matches.

Newcastle’s victory against Aston Villa last week did much to add to the perception that the club’s recent problems have been due to injuries rather than a dramatic loss of form. Given this, Alan Pardew’s club should put together another good effort.

The Magpies will come out on top on Saturday. With Fulham and Crystal Palace next, Newcastle could go on a good run.