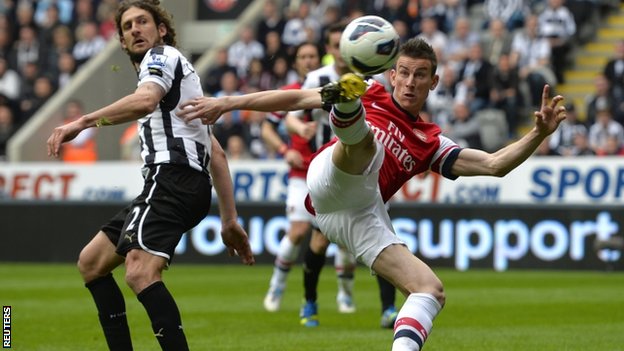 Newcastle United will be hoping to give their increasingly disgruntled fans something to feel good about when they face Arsenal at Emirates Stadium on Monday.

It has been a season of missed opportunities for Newcastle United. The Magpies have been good and bad in equal measure this season.

Alan Pardew will make his return from serving a seven-match suspension for attempting to headbutt Hull City’s David Meyler back on March 1st. The club fared very poorly in his absence, having won once in those seven matches.

Their opponents Arsenal will go into the weekend with a one point advantage over Everton for the final Champions League position for next season. Arsène Wenger’s club is coming off a 3-0 victory against Hull City last weekend.

As mentioned, Alan Pardew will return to the touchline after serving his suspension for violent conduct. Mathieu Debuchy and Loïc Rémy came on as first-half substitutes against Swansea City last week and are expected to play against Arsenal.

Papiss Cissé is expected to be out for the rest of the season with a knee injury. Davide Santon will also miss the remaining three matches with a hamstring injury.

Midfielder Moussa Sissoko could return from a hamstring injury of his own in time to face Arsenal. Forgotten man Hatem Ben Arfa has been battling a thigh muscle strain which caused him to miss last week’s match. Luuk de Jong has picked up an unspecified injury as well and could miss the match.

Arsenal are without some key players as well. Jack Wilshere is expected to be out longer with a broken foot. While, English international Theo Walcott is done for the season with a knee injury. Midfielder Abou Diaby is recovering from a serious knee injury and is unlikely to play on Monday.

German winger Serge Gnabry has missed the last few matches with a knee injury. Thomas Vermaelen (Hamstring) and Kieran Gibbs (foot/ankle) could make their return against Newcastle. Nacho Monreal and Mesut Özil have returned to action in recent weeks after injury layoffs.

Arsène Wenger has favoured the ‘continental-style’ 4-2-3-1 formation this season. Mesut Özil is expected to play in the ‘number 10’ position behind French striker Olivier Giroud.

Giroud leads the Gunners in goals this season with 14. Aaron Ramsey comes in second with nine. Lukas Podolski is close behind with eight goals this season. The German international has scored four goals in the last two matches for the club.

Newcastle experimented once again with a three-man defence last week against Swansea City, but quickly reverted back to four when Debuchy came in for Papiss Cissé.

With Loïc Rémy available, Alan Pardew is likely to go back to the 4-4-2 formation. Debuchy is likely to be in the starting XI as well. If Sissoko is not fit enough to play, Dan Gosling is expected to get the start.

Arsenal won the earlier meeting this season between these two clubs 1-0, with a goal by Olivier Giroud. And they have dominated the recent history as well. Newcastle have not beaten Arsenal in the last six contests. Arsenal have been great this season at the Emirates where they are currently unbeaten in their last 16 League matches.

Since the beginning of the calender year, the Magpies have only won two of eight matches away from home. They have failed to score in five out of the last six away matches. But they will no doubt be encouraged by the return of their manager Alan Pardew, Rémy and Debuchy.

Newcastle United will come out with a much better effort than in recent weeks. But the Emirates will remain a fortress. The match ends in a draw.