Thank you to Newcastle Stats (@NewcastleStats) for the article - you can see more of their writing HERE. 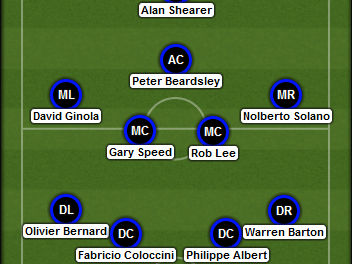 We recently asked our Twitter (@NewcastleStats) & Facebook (/NewcastleStats) members what they considered to be Newcastle United Football Club’s greatest ever Premier League side. We tasked you to contemplate the greats who’ve graced St. James Park since the Premier League era began (one that we’ve been a mainstay, having missed only 2 seasons – 91/92 & 09/10) and produce a theoretical side of our finest players from past seasons.

This of course sparked massive debate (with a huge array of names forwarded); where some may argue inclusions/exclusions, I don’t think the strength and quality of this side can be disputed – I’ll let the side do the talking.

Here’s our findings, as voted by you:

On the face of things, I can’t see why this side could not potentially challenge for the title in the present day Premier League, if not at least reach a minimum of top 4 finish. A mouth-watering combination of the “entertainers” attacking flair, the calming influence and experience of Sir Bobby Robson, coupled with arguably some of the most talented players from the last 2 decades would be a deadly – albeit theoretical – combination. Of course, as with everything in football (and Newcastle United in particular for that matter) nothing is certain.

Competition for the side was fierce with many players having been nominated. However this was even more applicable to our strike force. It was an incredibly even affair, with similar levels of support shown for Shearer, Beardsley, Cole & Ferdinand (and Xisco actually; there’s always one!).

Although difficult, we decided in the end to award the places to Beardsley & Shearer, given their service to the club (18 years, 579 appearances and 256 goals between them in the Premier League alone). The latter pair, although only having had brief spells at NUFC commanded spectacular goals per game ratios:

Perhaps the most shocking deduction from our all-time best Premier League side however is that the starting 11 cost an estimated total of £47.73m in transfer fees. That’s an average cost of only £4.34m per player. You could argue that the prices for some of our older acquisitions are unrealistic given today’s market, but even inflation-accounting they’d represent great value; especially if you consider the following:

More importantly though, how does this side compare to our current Premier League 11? 2 of our current side actually feature in the theoretical squad. Let me know your thoughts.