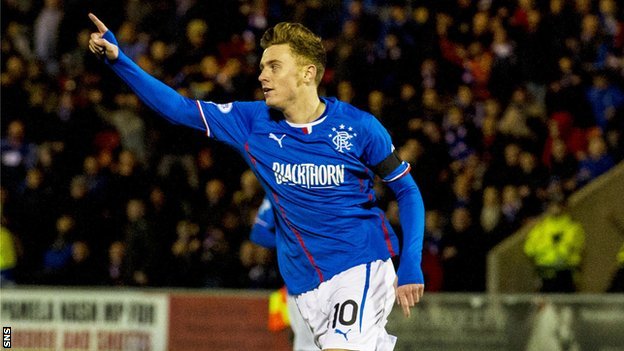 Newcastle are, according to a number of Scottish news outlets, looking at Rangers midfielder Lewis Macleod as they weigh up a possible bid in the January transfer window.

The 20 year-old has caught the attention of Toon head scout, Graham Carr,  this season – form which has led this month to a recent call up to the full national side.

With eight goals already this season, MacLeod is vital to Rangers’ promotion hopes. It is obviously vital Rangers keep their best players to try and make that instant return to the top division. However, having lost to Hearts last weekend, the Glasgow club are now nine points adrift of their Edinburgh rivals, and its increasingly looking a feat beyond their capabilities.

Macleod signed a five-year contract with Rangers in 2012, and Ally McCoist has recently expressed his desire to keep the player on for another few seasons at least. But the perilous financial situation at Ibrox could leave them vulnerable should offers be forthcoming.

If MacLeod is of the right quality then Newcastle buying him with an instant loan back to Rangers would make sense.

However, many Newcastle fans would wonder about the size of any transfer fee and whether the amount of cash would match his talent. Enough criticisms have been made of the standard of football in the SPL, let alone the First Division. Nevertheless, having seen a few videos on Youtube(…), he looks quite a talent – and he never seems to miss as well!