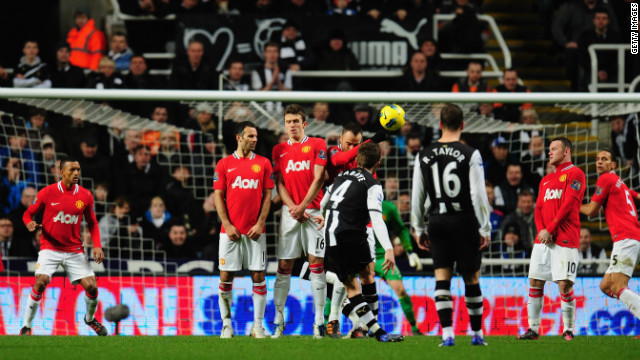 Newcastle United will welcome the Red Devils to St.James' Park for a rare mid-week encounter. Both clubs have struggled with their form of late but are coming off victories.

The Magpies’ win on the weekend against Aston Villa lifted some pressure on John Carver. It was only the club’s second win since Alan Pardew’s departure. Wednesday’s match begins a very difficult stretch of matches for Newcastle. They travel to Everton next week, before facing Arsenal, Sunderland and finally Spurs.

Manchester United beat Sunderland on Saturday on the strength of two goals by Wayne Rooney. The club is also heading into a difficult stretch in their schedule as they hope to qualify for the Champions League for next season. Louis van Gaal’s club beat Newcastle 3-1 on Boxing Day in an earlier encounter between these two clubs.

Newcastle got a great boost this past weekend when Jonás Gutiérrez made the bench against Aston Villa for the first time since being ruled cancer-free. Jack Colback served a one-match yellow card suspension in the last match and will returned for Wednesday’s match. Rémy Cabella (knee) could return from injury on Wednesday as well. Massadio Haidara is doubtful because of a knee injury.

Paul Dummett (knee) and Cheick Tioté (knee) are not expected to play and both could be done for the season. Siem de Jong (collapsed lung), Rob Elliot (thigh), and Rolando Aarons (hamstring) are expected to be out longer as well. Steven Taylor (ruptured achilles tendon) is out for the rest of the season.

Louis van Gaal has close to a full squad at his disposal, although Robin van Persie is expected to be out for the next month because of an ankle injury. Michael Carrick (calf muscle) and James Wilson (thigh) are struggling with fitness and were unused substitutes against Sunderland.

John Carver finally decided to break from the Pardew era in Newcastle’s win against Aston Villa. The Magpies boss used the 4-4-2 formation instead of the long-established 4-2-3-1 that Pardew favoured. Ayoze Pérez was dropped in favour of Emmanuel Rivière. Sammy Ameobi and Gabriel Obertan were also given starts. It was enough to overcome Villa, however, Carver’s methods are set to be tested by a much more challenging opponent in Manchester United.

Louis van Gaal’s tactics have been very difficult to predict this season. But it does look like we could expect United to play with four at the back. Against Sunderland, the Red Devils used a fluid 4-4-2 formation. The loss of van Persie should mean that Radamel Falcao should get the start, with Wayne Rooney in a mobile role alongside him.

Van Persie leads the club in goals with 10 but will be unavailable on Wednesday. Rooney has brought his total up to eight this season. Juan Mata comes next with five. Angel di Maria has created the most goals this season for United with seven.

United have had the upper hand in reason encounters, having won five of the last seven matches between the two sides. These two clubs always seem to play in high-scoring matches. There has been more than three goals scored in six of the last seven encounters. The only exception was Newcastle’s 1-0 win at Old Trafford last season.

Newcastle’s win at home on Saturday was their first in four matches. While Manchester United have struggled badly on the road recently. They have only one victory in their last six league matches away from home. And the atmosphere at St. James’ Park is always a little more electric when United comes to town.

The Magpies have played in many close matches against the Red Devils in recent years. The home side should manage to come away with a draw.