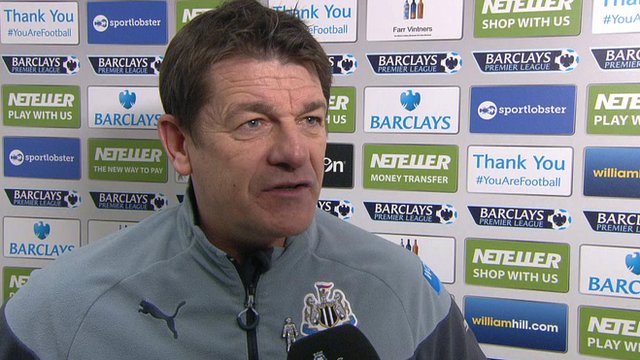 Carver's post-match interview technique is questionable, to say the least

Last season when Alan Pardew was banned for his head butt on David Meyler, John Carver took charge of the team against Fulham.

It was a match that the Newcastle United lost 1-0 to the Cottagers thanks to an Ashkan Dejagah goal. The goal came from the right side of defence where Mapou Yanga-Mbiwa was playing; a left sided center half. In his post-match interview Carver had this to say:

“What we should have done is defend a little bit better,”

“He comes inside on his right foot and we shouldn’t open up the goal – he should go on the outside.

At the time, I remember feeling a bit put out by Carver’s comments. It’s not often that managers directly refer to specific players, even when glaring mistakes have been made. Nevertheless, as the assistant boss at the time, it didn’t seem too much of a problem – perhaps such brutal honesty was needed to compliment the overly-loyal Pardew.

However, it now has become something of a habit of John Carver’s i.e. blaming players in public. He blamed Mehdi Abeid for the equalizer that Stoke City scored in the dying minutes of their game and he had this to say to NUFC TV after the defeat to Everton.

“They scored from their first opportunity. We created it oursleves by not tracking the runner.

“McCarthy runs off Riviere and the ball goes up to the striker (Lukaku) – he’s got acres of space and I must say their two strikers showed you how to play centre-forward.”

Not sure if a centre forward should be tracking a defensive midfielder’s late runs… but what do we know.

Another thing that Carver seems to do is criticise some of the influential players. Tim Krul made two errors against Southampton and Everton but he got away with any comments made. Another one who seems to get away lightly is club captain Fabricio Coloccini. The 33 year old made a reckless tackle, got sent off, and when considering the club’s current defensive frailties, his rashness was almost unforgivable.

So Carver cannot have this divide in the dressing room with the haves and the have nots.

John has a contract that runs till 2020 and even if the new coach comes in it is likely that he will remain at St. James’ Park. And if he wants the respect of players and progress he must do away with this bad habit.