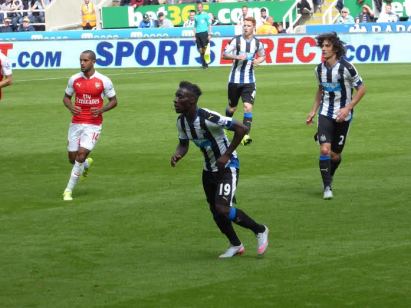 It has been a rough season for Newcastle United. The team has been riddled with injuries this year and has lost its goalkeeper, Tim Krul, in addition to the loss of new defensive signing Jamaal Lascelles.

The Magpies have been floundering about the bottom of the tables all season long, but vital wins against both Liverpool and Tottenham have given them new life as they hope to avoid relegation this season.

Backup goalie Rob Elliot has been impressive between the sticks in the absence of Krul and was a crucial part of Newcastle’s victory against the Tottenham Hotspur. It is also beginning to look as though new strikers Aleksandar Mitrovic and Ayoze Perez are finding their scoring shoes. Both players notched crucial goals in the important win against Spurs.

The performances of Perez have quickly attracted the attention of some of the Premier League’s bigger fish including Tottenham Hotspur and Manchester United. However, here’s hoping Newcastle will do what they can to keep the talented young player on their side.

For his part, Perez said that he wishes to stay with the club and questioned his chances of playing first team soccer with a larger team. “I am very happy at Newcastle. They gave me everything, they made me professional,” Perez said. “I want to continue working with them, trying to climb on the table and then whatever happens will happen.”

In the game against the Lilywhites, Newcastle was able overcame it’s usual struggles and scored both of their goals after the halftime break. Statistically, Newcastle are “the worst post-break travellers in the Premier League.”

Prior to the match against the Spurs, they had scored three goals less than than any other team in the league after halftime. Hopefully this performance is a sign of the Toon turning the curve even though it’s a bit early to make such predictions.

The much-needed win against Tottenham Hotspur has offered a lifeline for the Magpies. Provided they can walk away with a win in the upcoming match against last place Aston Villa, manager Steve McClaren may be able to breathe a little easier. The win has put Newcastle in 15th place, one spot ahead of Chelsea and clear of the relegation zone.

The club parted ways with manager Alan Pardew at the end of 2014 and replaced him with McClaren, who has been on the hot seat all season long. While pleased with the way his team has performed in the past week, McClaren has said that they have a long way to go and that these wins don’t mean Newcastle are out of the woods just yet. “The criticism has brought everyone closer together,” he added. “You know at Newcastle you are only two days away from another crisis… we have not turned a corner.”

However, if Newcastle can manage to maintain its momentum and secure what should be three easy points at Aston Villa, the team will be much more comfortable as it attempts to crawl its way back into the middle of the tables.