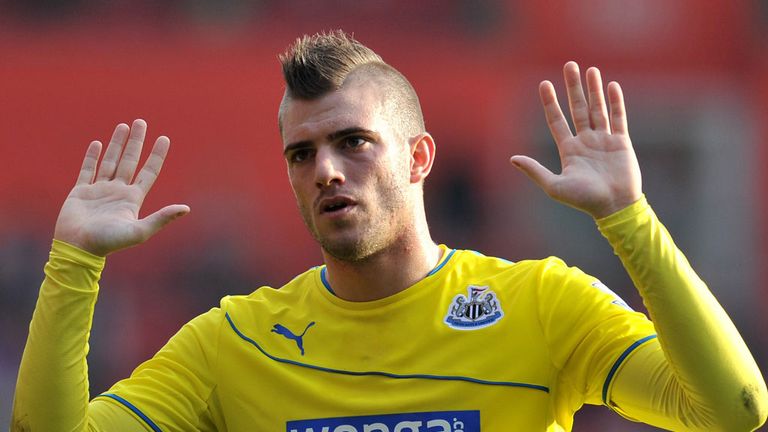 Inter Milan and Italy left-back, Davide Santon, is being linked with a return to Newcastle.

In what has been a bizarre past 24 hours, Newcastle have been linked with no less than five new players, three of which are left-backs.

While strikers Jordan Rhodes and Seydou Doumbia have been supposedly been the subject of bids from the Tyneside club, defenders Kieran Gibbs, Guilheme Siqueira and Lucas Orban have all been mentioned as possible new recruits in the build up to Deadline Day.

Now, however, we are being linked with a move for a former flame, Davide Santon, who has failed to live up to expectations in Italy since departing Newcastle last Summer.

The right-back has made just nine appearances for the Serie A side since he completed a permanent move to the San Siro from the Toon in the summer.

And now, according to Ed Aarons of The Guardian , Newcastle are keen to bring the Italian back to England as they bid to sure up their defence in their battle for Premier League survival.

Bizarre #nufc transfer line: Newcastle looking to loan back Davide Santon from Inter after selling him in March!

Santon hasn’t featured for Inter since October and it has been suggested the player is open to a return to England.

There is no doubt that Newcastle have surpassed ALL expectations so far this Janaury (which is saying a lot given their penchant for disappointing us fans), and never in my wildest dreams had I anticipated the club spending the amount they have.

The addition of a left-back, as well as the inevitable striker reinforcement, will really add depth to our already encouraging-looking squad.

Whether Santon is the answer, I do not know. But at least are being linked players – there’s never a dull moment being a Newcastle supporter.

Newcastle being linked with a number of left-backs in the past 24 hours. Who would you choose??

Would you welcome a Santon return? Or should we be pursuing other targets?

2 Comments on Newcastle Linked with Bizarre Move for Former Defender