Not since the arrival of Sir Bobby Robson in September 1999 has a managerial appointment at Newcastle unified supporters.

Rafa Benitez, similar to the late England legend, signals a massive coup for the club and inherits a team in trouble. Northeast native Robson returned home after years of storied success with some of Europe’s elite sides when predecessor Ruud Gullit resigned leaving Newcastle second-bottom in the Premier League; and his impact was instant.

Robson led the Magpies to an emphatic 8-0 victory over Sheffield Wednesday in his first game in charge at St James’ Park, which saw Alan Shearer grab a famous five-goal haul.

After quickly easing any fears of relegation, the former Barcelona, Porto and PSV Eindhoven boss went about transforming Newcastle into a Champions League outfit in just two seasons.

Robson arriving at Newcastle in Spetember 1999

Benitez, however, whose own CV includes two La Liga titles with Valencia, a Champions League crown with Liverpool and Europa League win with Chelsea among many other achievements, faces a far sterner task than Robson ever did.

The Spaniard has 10 games, not 30, to secure Newcastle’s top-flight status and a squad that does not boast a clinical finisher like Shearer.

The gravitas of his challenge cannot be overstated, but Benitez will at least have the fans’ total backing from the offset, a rare privilege afforded on Tyneside. In the Premier League era, only Robson and Kevin Keegan before him have enjoyed such univocal support.

Of course, how massively important football is in this part of the world is a well-worn line, but only because it’s true.

Newcastle fans have not had an easy ride under the ownership of Mike Ashley and save for the short-lived placate that was a fifth-placed league finish in 2011-12, there has been very little to cheer about.

The three managerial appointments before Benitez were viewed as underwhelming and ultimately proved unsuccessful for the most part.

While Alan Pardew can lay claim to the aforementioned fifth-place and was probably constrained by Ashley more than any other manager in the last decade; his several broken losing records, stubborn tactics and touchline misbehaviour will forever overshadow his Newcastle reign.

Ashley, to his credit, appears to have changed his approach towards investment since Pardew left for Crystal Palace. His mistake, though, was in letting Steve McClaren, Graham Carr and Lee Charnley persist with their ill-fated head coach model and transfer committee for so long. 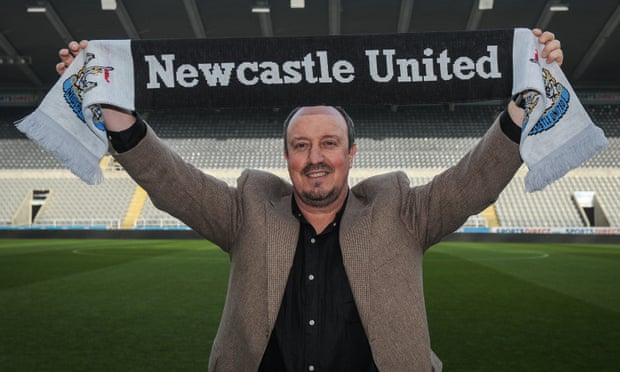 Can Benitez save Newcastle?

Hiring Benitez, Geordies will hope, finally represents a turning point and a chance to fulfill potential.

Although Newcastle’s squad is undeniably lacking in certain areas, it is not entirely without its merits and does have the quality within it to beat the drop. If anyone is going to cajole the best out of Georginio Wijnaldum, Jonjo Shelvey and co, a serial trophy-winner isn’t a bad shout.

Benitez’s Newcastle bow on Monday night comes away at league leaders Leicester City no less, and as daunting as that is, the travelling Toon Army will be fully behind their new man. At last, Newcastle are united again.

1 Comment on Rafa Benitez is a uniting force for Newcastle fans – can he follow in the footsteps of Sir Bobby Robson and save them?