As the Championship season now draws to within a mere five weeks of commencing, Newcastle United’s squad currently has a very familiar look to it. Whilst the supposed exodus of players that was inevitably predicted has yet to materialise, it is the transfer incomings that are of greater importance to Newcastle’s future.

Transfers of any sort have been non-existent thus far at St. James’ Park, though fans are displaying an uncharacteristic calmness at this lack of activity, such is the trust that the Toon Army have in Rafa Benitez. The Champions League winning manager has embedded himself into the core of the club during his short tenure on Tyneside. As such, there is an opinion that, despite relegation, Newcastle United are in a better position than they have been for years.

Nonetheless, squad investments have to be made if Newcastle are to achieve their ambitions of an immediate return to the Premier League. Many media outlets are suggesting that Crystal Palace striker Dwight Gayle will be Rafael Benitez’s first signing at St. James’ Park, with a fee in the region of £10m being touted for the 25 year old.

Whilst it is beyond question that Newcastle’s lack of goals was one of the biggest contributory factors in last seasons relegation, being linked with a player who has a goal ratio on the wrong side of 1 in 4 over the last three seasons will hardly alleviate fans’ worries. Dwight Gayle’s 15 goals in 63 league appearances for The Eagles is indicative of a player who hasn’t settled in the Premiership despite having plenty of playing time.

The fact that Gayle has fallen down the pecking order at Palace behind Connor Wickham and Emmanuel Adebayor isn’t very inspiring and should show where his striking ability is held in esteem. Moreover, Crystal Palace were willing to offload Gayle last year to Bristol City for a fee rumoured to be around £9m – a deal that wasn’t completed because of the striker’s determination to fight for his place at Selhurt Park. Nonetheless, Crystal Palace appear to be willing to let Gayle leave despite having brief flirtations with relegation themselves. As such, alarm bells should be ringing for Newcastle United.

As familiar as Magpies fans are with the tactical shortcomings and general footballing ignorance of Alan Pardew, surely even he wouldn’t let a striker leave the club unless he thought he genuinely wasn’t good enough. After all, Palace’s top league goalscorers last year all shared a pitiful five goals apiece (Connor Wickham, Yohan Cabaye, Yannick Bolasie and Scott Dann). The prospect of receiving £10m for Dwight Gayle will have Pardew laughing. God forbid, he may even start dancing.

Instant promotion back to the Premier League is a must for Newcastle United. The widespread opinion amongst fans and media alike is that Rafa Benitez will be successful in achieving this goal. If this is indeed the case and Newcastle make a return to the Premier League, then the signing of Dwight Gayle will leave The Magpies in possession of a player who has previously been below par in England’s highest tier. In fact, if you compare Dwight Gayle’s performance with that of current Newcastle United strikers, you will see that he doesn’t offer a single improvement on any aspect of play than what is already at the club. As for Danny Ings’ inclusion, I’ll get to him later…

Some fans may hold the opinion that Dwight Gayle would provide the Newcastle squad with some competition for strikers and he may be an astute short-term fix for a Championship campaign. That claim may have some legitimacy, but £10m for a temporary solution and a ‘squad player’  is so steep it’s almost vertical. 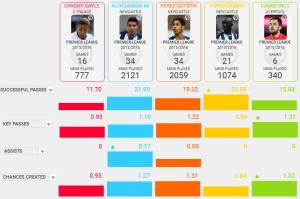 For roughly the same money that is being rumoured for Dwight Gayle’s services, Newcastle could capture the likes of Ross McCormack, Chris Martin or Nahki Wells – proven goalscorers at Championship level. These players have largely outperformed their respective squads and may feel like a move to Newcastle United guarantees them a chance at promotion and, ultimately, a shot at the Premier League that may otherwise elude them. Looking upwards, however, Newcastle may decide to pursue another striker who currently plies his trade in the Premier League.
Danny Ings, although unrealistic in the short-term, is worth keeping an eye on.

The Liverpool man will be competing with Daniel Sturridge and an ever-improving Divock Origi for a starting berth under Jurgen Klopp, and many wouldn’t fancy his chances. Strongly linked with a move to Rangers in recent weeks, the bookmakers even slashed his odds on joining the Scottish club. At 23 years old, Ings still has plenty of time to develop and he may feel the need for first team football before too long.

Whilst a move to a Championship club may not seem like a good career move, should Newcastle be in a strong league position during the January transfer window then he may be able to be persuaded to swap Anfield for St. James’ Park with the promise of first team football. His stats in the comparison matrix above show how much he outperforms the current Newcastle United players in terms of goals scored and chances created per 90mins. As such, he would be a perfect addition to Rafa’s ranks if a return to the Premier League seems likely.

Alternatively, Rafa Benitez could exploit the loan market for a striker as a temporary measure and not be left lumbered with a £10m paperweight upon the expected return to the Premier League. Patrick Bamford would be a useful addition to the squad and is a proven goalscorer in the Championship after netting 17 times in 39 games for Middlesbrough in the 2014/15 season.

Similarly, highly regarded Chelsea youngster Dominic Solanke may also be a viable target. The 18 year old has been absolutely prolific at youth level for Chelsea, scoring 20 goals in 25 games in the 2013/14 season before netting an incredible 41 goals the following season – including 12 goals in 9 UEFA Youth League matches. Last season Solanke was loaned to Dutch Eredivisie outfit Vitesse Arnhem, whereby he scored 7 goals in 25 appearances. The striker – who is also capable of playing as a winger – has ambitions of breaking into Chelsea’s senior team, and experience at Newcastle United would benefit all parties involved.

Keeping things within the squad, academy graduate Adam Armstrong is fresh off a brilliant loan spell at Coventry that saw him score 20 goals on the way to being voted in the PFA League One Team of the Year. There is no doubt that the Toon Army will be eager to see one of their own getting game time and stepping up to the plate much like Andy Carroll did in The Magpies’ previous Championship-winning season.

In Rafa I Trust

There are a number of avenues that Rafa Benitez could opt to go down, but the obvious benefits of a loan signing is that it would avoid the sizeable transfer fees that clubs could demand from Newcastle United given our obvious desire to reclaim our Premier League status at all costs.

Dwight Gayle is evidence of this. Rather than falling into the trap of simply buying a striker “because we need one”, a considered approach of the options available to Newcastle United would bring about better long term results. The likes of Mitrovic, Perez, Armstrong, Cisse and Riviere are currently on Newcastle’s books. Instead of handing over £10m for a player who could very well be an average squad player, why not give Armstrong, Cisse or Riviere that chance to try their luck in the Championship? After all, there are no guarantees that Gayle will be an improvement on those players and £10m could be spent much more lavishly.

Regardless of what happens with Newcastle’s transfer dealings, though, I have full faith in Rafa Benitez’s decisions. If Dwight Gayle does indeed become one of the Spaniards signings, I will naturally hope he is successful and proves me wrong on the pitch. Being Newcastle United fans, it is an unfamiliar situation we find ourselves in to have any faith in a manager, but Rafa Benitez we would happily let lead us blind. I would love nothing more than to be put in my place by Benitez on his way to delivering the successful campaign we are all hoping for. I have full faith that he will show the football world why Newcastle United fans have simply fallen in love with him. In Rafa I trust.

If you enjoyed this piece, Kain Watson runs his own brand new football blog The Dugout where he writes regularly and I’m sure he’d bloody love for you to follow it. Go on, give it a follow. Go now. Seriously.

1 Comment on Is Dwight Gayle the Man for Newcastle?