Student broadcast journalist at Nottingham Trent University. Trying to gain as much experience and practice I can in sports reporting. Currently I am the Editor at Read Golf and freelance editor for ClickOnGolf which is part of the successful Clickon network. As far as football goes I'm a big Newcastle fan so you'll find my work across numerous fan forums and websites. I am a senior writer at Read Newcastle as well as a writer for NUFC360 and TFF Newcastle. My newest position sees me as one of the Editors for 'The Spectators View', where I am the staff journalist and deal with anything ranging from the latest club news, transfers, team selections and matchday news. When it comes to TV and Radio broadcasting I am very involved in both aspects. I am the Head of Sport and a presenter at Nottingham based Trent TV as well as a weekly radio presenter on FLY FM and FLY FM Sport. You can find all my work and views on my Twitter, @HarveyJamison, it would be great if you could follow!

United were back to winning ways at the weekend with the 4-0 demolition of Birmingham City. The next challenge is a trip to the DW Stadium to face off against newly promoted [...]

A sell-out crowd will welcome the visit of Benitez’s Newcastle at Elland Road this weekend, the first of its kind for six years. It is one of the most hotly anticipated [...] 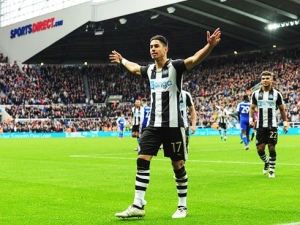 Newcastle are three points clear at the top of the Sky Bet Championship after a decisive 3-0 win over Ipswich Town, making it their 10th Championship win from 12 games.  The [...]

A resounding 6-0 away win, the largest in over half a century, is the perfect platform for United to continue their electric form in the last few games. Five wins and five [...]

Yes, you didn’t read that wrong! Newcastle United were on top form away at Loftus Road and knocked six goals past a stunned QPR side.  Goals from Aleksandar Mitrovic, [...]